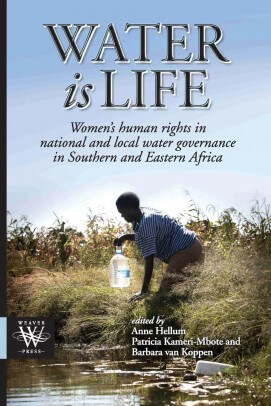 The book is an easy read though intimidatingly bulky, yet much of the chapters are grounded on a solid research foundation spanning from 2011 until 2014. The book was also a collaborated effort between the University of Oslo, University of Zimbabwe, University of Nairobi, Strathmore University, the University of Malawi and the International Water Management Institute (IWMI) in South Africa. This review provide a summary of key points in the book as well as issues that raise questions related to water governance in the Zimbabwean context and beyond.

The studies underpinning the book focused on the situation in four southern and eastern African countries: Kenya, Malawi, South Africa and Zimbabwe. Although the book recognizes that water is a multi-sited and complex field, they chose to focus on these four countries because they represented similarities and variations regarding colonial political and legal history. All countries selected are former European colonies and they inherited western laws as well as readapted customary laws in the image of colonial conquest objectives. These countries have also ratified most of the regional and international human rights instruments that embody the human right to water and sanitation. Are these countries practicing good water water governance as enshrined in the protocols they signed to? It is a difficult question to answer or generalize in the context of Africa and Southern and Eastern Africa. Yet there are important cases that allows for specific lessons that can help in improving water governance.

What is the rights-based approach to water governance?

This is the core element of the book as it was exploring women’s rights in national and local water governance in Southern and Eastern Africa. The human rights based approach is used as a conceptual framework in the regional study. To the editors of the book, a rights-based approach “prescribes normative standards regarding men’s and women’s access to water and their involvement in processes through which decisions regarding water are made”. Human rights based approach to water governance uses a human rights lens to interrogate water governance arrangements and fundamentally it aims to induce reforms in the society’s approach to water governance. The authors examined how the right to water and participation in water governance is put into practice in a local, low-income setting. Essentially, a rights-based approach means seeing water as a legal entitlement with individuals at the centre. The book emphasizes the importance of having both men and women participate in decision making processes regarding the provision, location and technology of water and sanitation facilities in the community. One question that was immediately raised in discussions around this book was why the extended focus on women as implied in the book title?

If water is a human rights issue that involves gender equal participation in water governance, why is it that the book focuses on women only let alone both youth and men use water on a daily basis?

Chapter 2 of the book justifies this choice of women. The editors highlighted the question of whether the human right to water and sanitation is merely extended to women or it is truly “engendered” in line with the following distinction which they quote from Sandra Fredman (2013:218): “As a start it is necessary to recognize the distinctive nature of women’s experience of poverty and disadvantage. This suggests that it is not sufficient simply to extend socio-economic rights to women. Instead, socio-economic rights need to be recast in the light of the demands of substantive gender equality. Substantive gender equality goes being treating women in the same way as men and requires transformative measure. This in turn entails re-conceptualizing the rights themselves.” The book targets women in their studies of water access opportunities and participation in decision making because of their contextual background as African women who have been identified as having unequal access to socio-economic resources in general.

The book recognizes the fact that lack of water and sanitation is felt across African society but African women within vulnerable ethnic and socio-economic groups are disproportionately burdened as child bearers and family providers. African women play a crucial role in the food security of most rural and peri-urban households: they produce between 60-80% of the crops according to a study by the Human Rights Council Advisory Committee on Rural Women and the Right to Food 1 . The water and sanitation provision from this standpoint is therefore directly related to division of labour and brings to light deep gender inequalities embedded in our societies. Rights of women have also been particularly focused on in the African Charter on the Rights of Women as well as the Convention on the Elimination of all Forms of Discrimination Against Women (CEDAW) because of their vulnerable position in society 2 . Therefore the book takes a gender-specific approach in contextualizing the role of women in water governance in Southern and Eastern Africa.

Accessing water is based on key decisions made at household, community and national level, and hence touches on water related policies enshrined in legal frameworks, policy statements, and also the manner in which water is allocated by specific gatekeepers. The authors used gender-specific instruments in their selection of women as targets of the study. The aim was to disaggregate and particularize essential elements of the international water rights discourse, which takes a gender-neutral approach to socio-economic rights in general and the human right to water and sanitation in particular. So although they selected to conduct a gender-specific study it is still relevant to the water governance discourse. The book also investigates the inter-relation between gender, human rights and water governance which makes for a balanced view.

A look at the Zimbabwe context included in this book…

Chapter 11 of the book “Water is Life” generates interesting questions and points for consideration with regards to water governance. This section of the book covered four suburbs in Zimbabwe namely: Glen Norah, Harare North, Hatcliffe Extension and Mabvuku. These areas were high density areas during the colonial era and Hatcliffe is currently largely an informal settlement. These areas are areas characterized by low-income, predominantly income vulnerable communities. The researchers in Zimbabwe concentrated on the responses to the water crisis between 2006 and 2009. It was interesting to read about the community’s response to the water crisis during this time which included digging wells in backyards and wetlands, fetching water from nearby rivers, boreholes and streams, digging latrines instead of relying of flush toilets, using the bush/open space and flushing toilets with recycled water when waste had accumulated.

As a result there was an outbreak of cholera and typhoid because of this community attempt to find alternatives to water supply. The book notes that water became contaminated because one household may have dug a well where another has dug a pit latrine, all running from the same underground water source. There were noted blockages of sewage pipes and the situation was difficult to manage. An international response to the cholera outbreak brought about some relief as well as the Government of National Unity of 2009 which lessened some of the political tension in the country at the time. The post-cholera period between 2009-2014 saw improvements in water supply and availability but there are still tensions regarding the governance of water by local authorities. People in Zimbabwe continue to rely on alternative water sources such as boreholes and wells or buying from private vendors.

The failure of local authorities to ensure free and safe water supply to all households means that those who cannot afford to buy water or drill a borehole on their yard. Most communities still rely on communal boreholes which have management issues. Local citizens refuse to pay for water supply because for them it is their basic right and why pay for water that is not available most of the time? The book explored the Zimbabwean Water Act 1998 and concluded that the rights based approach was not working in practice. The proposed introduction of donor supported water meters to improve revenue collection was controversial considering the fact that the poor in society will be deprived of basic water and sanitation. The Zimbabwean constitution has the right to water embedded within it. A new Water Policy for Zimbabwe was adopted in 2013 to address the provision of water and sanitation as a human right. The book critiques the Water Policy on the grounds that it does not clearly define these rights and their implications. Considering that Zimbabwe is currently in an economic crisis where the majority of Zimbabweans live below the poverty line, the book explains that it is difficult to then measure the minimum level of income which the cost of water and sanitation should not surpass.

Conclusion: why do we care about water governance at Ruzivo?

There are lots of aspects related to water governance addressed in this book that this review cannot possibly cover. It is well-researched and grounded in theory which provides a wealth of information on water governance in Southern and Eastern Africa. Since water resources do not exist in isolation, and cannot be divided but only be shared, water management and governance are interlinked. Ruzivo is working with regional partners in Zimbabwe, Botswana, South Africa and Mozambique on water governance. Our view is that an integrated effort to establish a water-governance and sharing mechanism can be an effective tool to tackle isolationism in water management and reinforce regional interconnectedness. The issue of participation of women in the decision-making around water governance in the book “Water is Life” provides lessons that connect our work on providing regular updates on the political economy of trans-boundary water resources issues, management and development in support of sustainable investments. Our work focuses on the socio-economic aspects of water management and highlight the links between water, energy, food and human security from a regional perspective, while we work with rural communities on water related dialogue. Our review of this book is to provide a platform for further dialogue around the book, other water related issues and also issues we face in Ruzivo’s water governance related work.