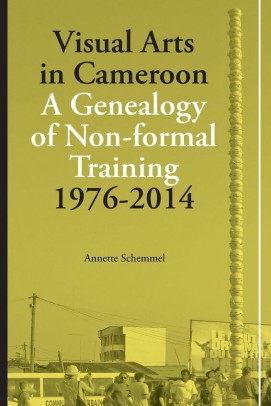 I have to confess that before reading this, I could only name three Cameroonian artists: Azante Spee, Angu Walters and Napoleon Bongaman. But thanks to this timely edition, I've been introduced to others; such as Koko Komegne, Pascal Kenfack and Goddy Leye. But let me begin my review, with the one that attracted me the most.

From when I first saw it and throughout the reading of the book, I kept going back to page fifty five, to see the pen and ink drawing, called Historie des Bamoun. It is said that the Bamun drawing school developed from the Bamun Shu Mom script, designed around the turn of the 19th century, by the Bamun monarch, King Njoya. And this is where this book is another eye opener. I knew there were pre-colonial scripts in Ethiopia/Eritrea (Geez); south-east Nigeria (Nsibidi) and Liberia/Sierra Leone (Vai), but wasn't aware of the Bamun one. It is the cousin and namesake of the aforementioned King, Ibrahim Njoya, who is the best exponent of what I call Njoyism; due to its distinctive style, early history and the school where artists were trained in its use. When I think that the drawings were developed from the script, it remindes of the work of the Senegalese artist Yellimane Fall, whose use of the Arabic script, is central to his creativity.

The aforementioned drawing is a regal blend of the figurative and the typographic. It looks like an illustration from some ancient tome, decipherable to those who have learnt. Sad to think that this captivating style, has largely disappeared. Will we see research into it? Will Cameroonian artists take it up as a clarion call? Will the government see its value and contribute funding? From the palace at Foumban, Schemmel takes us to a mission school at Minlaba; from there to the Congo, Belgium and France, as she tracks the studies of the first Cameroonian artist to study abroad, Engelbert Mveng: but as the ''first Black Jesuit'' in his country, he took a degree in Theology. Reading lines such as ..''liberate the creative African genius'', ''unleash Africa's ability to develop its own technologies and industries'' and ''encouraged craftspeople and artists to draw on the engineering knowledge of pre-colonial crafts'', his vision reminds me of that of Demas Nwoko, the architect and Renaissance Man of 20th Century Nigeria and his ''New Culture'' vision. The Mveng mission, which was powered by his workshop, Atelier de l'Art, was to introduce an African aesthetic into Church architecture, interiors and liturgical attire. The workshop produced some of the most attractive church décor I've ever seen. Numbers must have risen, in the churches that it embellished it! This pioneering figure wrote for the legendary Paris based journal Presence Africaine and was a friend and collaborator of the Senegalese poet and politician, Leopold Senghor.

When you think that this book developed from a thesis, you can see that Schemmel has a real passion; to make sure that modern and contemporary art in Cameroon is recognised and documented. Many figures from the art community seem to have passed through Yaounde and Douala, especially via the Centre Cultural Francais and the Goethe Institut, but she is the one who took on the long overdue task, of recording the national creativity of recent times. A crucial task, especially when you think that most of the coverage of art in the region, focuses on its neighbour, Nigeria. Give thanks to Schemmel, for helping to address the balance.

Another surprise was to read that the Harmon Foundation had been involved in supporting and marketing African artists in North America, including the Cameroonian Martin Abossolo, who came to prominence in the sixties. Surprised, as I had always associated the Harmon Foundation, with its support of the African American artists and writers of the early 20th century, especially those associated with the Harlem Renaissance, such as Hale Woodruff, Langston Hughes and Archibald Motley. The Ghanaian artist Vincent Kofi, was another recipient of Harmon funding. In chapter two, where Abossolo is first mentioned, there is an alluring work of black and white, in Indian ink, by his contemporary, Gaspar Goman.

Journals! How come we know of the Drum from South Africa, Black Orpheus from Nigeria, but not Abbia from Cameroon? We are told that this quarterly, founded in 1963, the first arts magazine in the country, was founded by two Cameroonians, Bernard Fonlon and Eno Belinga. I was immediately drawn to the cover of the 16th edition, issued in 1967, partly because it featured the Shu-Mom script. Although in translation, I would love to read the article about Ibrahim Njoya, by the cultural campaigner Issac Pare.

When we think of sub-Saharan art student movements, we tend to think of the Zaria Rebels, or the Uli resurgence at Nsuuka, but the University of Yaounde had its student initiatives also. It was probably the third of the two, 'Club des Arts Plastiques', of longest duration, that had the most influence. In the late seventies, it exhibited work at both the Goethe Institut and the the American Cultural Centre. With this project, we saw the emergence of artists such as Goddy Leye.

At the same time as the student initiative, we saw the establishing of the first formation of professional artists, the 'Cercle Maduta'. Founding members included Andre Kanganyam and Koke Komegne. Schemmel informs us that ''members of the Cercle Maduta used to invest profits from commercial work into supplies for oil painting, a technique they preferred to employ because of its delicacy in their respective practices''. We are then told that the oils were only available in select shops and bookshops. Members exhibited where they could; ''restaurants, bars, furniture stores, hotels, nightclubs and cabarets''...

One of the great sections of this book, is that chapter that deals with the Systeme de Grands Peres. I see this as part of Africa's communal heritage, as expounded in ubuntu. That younger artists will spend time in the studios/workshops of the older artists, receiving tuition and support. A kind of informal apprenticeship, of unspecified duration, where the older artist became teacher, mentor and on some occasions no doubt, surrogate parent. Artists such as Pascal Kenfack, who had studied at the University of Paris and lectured at the University of Yaounde and Koko Komegne, who was tutored by the Congolese artist Faustin Kitsiba and presented ''Operation Optique'', were part of this system; they both were acclaimed as grand peres.

When we think of pioneering figures, we tend to concentrate on the male gender. For instance, when we think of 20th century art teaching in Nigeria, we focus on Aina Anabolu, Kenneth Murray and Akinola Lasekan; its not often that Clare Ugbodaga is mentioned, who taught the ''Zaria Rebels''. Or in Ghana, where we hear of Kofi Antubam, Ablade Glover and El Anatusi, but not of Theodosia Okoh, who went on to design the Black Star flag, at the time of Independence. So its good to see Justine Gaga mentioned and represented within the book, with two colour photographs of separate installations. An artist she was going to be and an artist she is, regardless of societal opinion and male domination. Her attitude and perseverance reminds me of the confidence and steadfastness, seen in the famous sculpture called ''Bangwa Queen''.

In the section entitled 'Artists Grassroots Initiatives', we hear of artists such as Viking Kanganyan and the seemingly ubiquitous Koko Komegne, who appear to be leading figures in the temporary exhibitions and workshop spaces that we are told appear here and there. I like the thought of pop-up exhibitions. Although its good to bring the people into galleries – even though they may not be able to afford the work - its necessary to have the pop-up version, with its more people-friendly pricing; bringing art to their locale, furthering the real meaning of ''art for all'', of that sweet-sounding word called inclusive. Through the insightful and crucial use of space, these artists are giving us a great example of community engagement. Another example of this endeavour, is the K-Factory, the venue of the Cercle Kapiski, founded by former students of Komegne, such as Herve Youmbi and Salifou Lindou. We are told that one of the areas it focuses its work in, is New Bell, one of the poorest areas of Douala. Good to hear that young residents of New Bell, after enjoying art interaction in their neighbourhood, have travelled to the city centre, to engage with art at doual'art, one of the larger art projects in the city. One of the noticeable successes of the New Bell vision, is that former resident Patrick Wokmeni, an aspiring photographer, who after attending residencies and workshops, exhibited at the 2009 African Bienelle of Photography – and is now a full time photographer, living and working in Belgium.

Then there's the Art Bakery, located at Bonendale village, where Goddy Leye, Joel Mpah Doh, Justine Gaga and other artists resided. There's a small, but enchanting photograph of the Wouri River, which runs past the village. In that setting and with all those minds interacting, it must have been a much-desired place to create in. One thing that was encouraged at the Art Bakery, was the reading of art history, To enhance awareness of the development of modern art and so gain personal analytical viewpoints.

My only regret about this essential writing, is that written in 2014, there wasn't more information on Nzante Spee, who after studying abroad, returned and set up an arts centre in Bamenda, possibly the first. Is that because the book was focused on the two large urban spaces of Yaounde and Douala? Would have liked to have seen him featured, especially when we think of the influence he's had on outstanding contemporary artists, such as Angu Walters and Napoleon Bongaman. Here's what he said about the interaction with art in Cameroon...''Artists are not very appreciated in Cameroon society. We are neglected and even if people do talk about festivals, once they are over, the same tough life starts up all over again.'' This sentiment is echoed in the book, in such sentences as 'Arguably, the Cameroonian government's inertia regarding cultural education is also reflected in the public perception of visual art today. In recent interviews recorded in Douala, art professionals have bemoaned a general disinterest in visual art.

But as they say 'there is light at the end of the tunnel'. On the penultimate page of the book, there is the following sentence... 'Interestingly enough, the Cameroonian government has recently started to invest itself in the domain of art/s education, as seen in the 2009 decree to implement arts education in public schools and the instalment of three new Instituts de Beaux Arts since 2010.

The last quote of this book goes to Goddy Leye.''To my mind, art is a universal quest and people, where ever they are, should be able to talk about it. Things may change from place to place – how art is presented and made – but, in the final analysis, it is the same thing everywhere. I salute Annette Schemmel, for taking the time to research and then to tell us, of the sagas that resulted from the quests, of the past and present artists of Cameroon.

IZIBONGO Magazine: Celebrating Art from African and the Diaspora