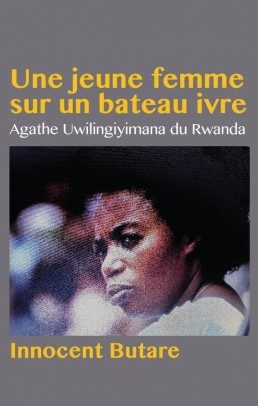 From the title of Innocent Butare’s thoughtfully structured biography Une Jeune Femme sur un Bateau Ivre, we know there are at least two main protagonists. Une jeune femme [a young woman], referring to Agathe Uwilingiyimana, prime minister of Rwanda, when she met her death on the night of April 6-7, 1994; and un bateau ivre [a drunken boat], in this case referring to Rwanda itself. Like in Arthur Rimbaud’s poem, the sinking ship lost at sea has a voice, and it describes the horror that stems from having no one at the helm: “comment survivre sur ce navire à la derive et sans commandant? [how to survive on this ship adrift without a captain?]” (2). This is Innocent Butare’s rendition of how one woman tried and failed to calm the seas before the boat set sail and how her failure led to her untimely death.

Butare’s work can be read in two ways: as a declaration of love or as an ode to Agathe, cloaked in a political biography. Indeed, Agathe and the author were lifelong friends and neighbors from “the colline of Nyamure, commune of Nyaruhengeri, district of Butare”(6). On the other hand, perhaps it is best read in reverse, as the political biography of a moment in time, an attempt at answering the question ‘why did this happen?’ with an ode to Agathe as its vessel. The reader is free to decide, which is one of the strengths of the book.

Another strength is the book’s creative form. It begins at the end of the story, the hours leading up to Agathe’s death after Habyarimana’s plane was shot down on the night of April 6th 1994. However, unlike most works that utilize this narrative tactic, Butare does not then skip to the beginning. He keeps to the backward movement in time, working his way from the final hours and through the final days, the final months of her term as Prime Minister, the final year of her tenure as Minister of Primary and Secondary Education, her time as a chemistry teacher at the Group scolaire de Butare, and so on back to the year of her birth in 1953. This steady walk back through time is articulated around the events that the author deems key to explaining her violent end by portraying a fallible and immensely brave character who is in tragic ways a naïve human being tackling a superhuman task. On a sinking ship. A “Drunken Boat.”

The first half of the book is a minute account of the hours, days, and months leading up to Agathe Uwilingiyimana’s assassination and the struggle she took on, fueled by a passionate desire to get rid of President Habyarimana and implement the Arusha Peace Accords. Butare weaves this account from his own testimony, personal interviews with Faustin Twagiramungu, who was to succeed Agathe as prime minister of the expanded government under the Arusha agreement, and earlier memoires and analyses dealing with the days leading up to the genocide written by Roméo Dallaire, Jacques-Roger Booh Booh, André Guichaoua, Ferdinand Nahimana, Tharcisee Renzaho, Aloys Ntiwiragabo, Bernard Lugan, Faustin Ntilikina, Jean- Baptiste Nkuliyingoma, Luc Marchal, and Gaspard Musabyimana. I name them because this blow-by-blow account is clearly contested ground, with reports being written by actors in the events who have differing agendas.

Despite the difficulty of sifting through contradictory testimony, Butare manages to weave a coherent picture while also pointing to places of contestation, unanswered questions, and justified criticism of the actions (or lack thereof) of actors on the scene, most notably General Dallaire, force commander of UNAMIR, and Jacques-Roger Booh Booh, then-Special Representative of the United Nations Secretary General. The author points out that the book both publicly and privately insisted that Agathe Uwilingiyimana was the legitimate head of government after Habyarimana’s death while being flippant about the kind of protection she needed under the circumstances (p.15-25). He accuses them of northern reasoning that failed to function in the mountainous tropics (25). And the refrain that bookends each recounted event in his timeline: “le doute est permis...” [we are allowed our doubts].

Through this opening half of the book, we get the sense that Agathe’s story is simply the choice of a lens through which Butare adds his rendition of events to those already published elsewhere. This quickly turns around through the second half of the book as the reader is brought closer to the protagonist’s personal biography, especially as it is enmeshed with that of the author. We are told indirectly at first that they were once to be married (125). The narrative moves from quoting outside sources, direct testimony and commentary to a play of dialogue between the author and protagonist, Butare and Agathe. We slip comfortably into a love story against the backdrop of terrifying political events.

From this point on, it is his biography as much as hers. His understanding of political events and critique of choices made have the benefit of hindsight like any other historian or memoirist; she is painted as a heroine with too much gumption, too much life, too much outspoken honesty and, frankly, too much woman for the situation and its uglier protagonists. This is Butare’s working hypothesis: in her quest to forge a nation based on her democratic ideals, Agathe sinned due to lack of political experience, as did her whole generation, born at the end of colonial rule and matured under autocratic rule. Where and how could they have learned to operate the social transformations necessary to navigate the end of Habyarimana’s rule, the power-sharing agreements dictated by the Arusha agreement, and the end of regional and ethnic violence?

As we move back in time, back through Agathe’s life, the interpretation of political events moves from micro to macro and we get a broader picture of the early 1990s and the havoc wreaked by the forced ‘return’ to a multiparty system dictated by western donors and made a condition for future loans from the World Bank and the IMF. The portrait of a nation via one woman’s life moves from detailed realism to broad strokes and exemplary anecdotes. And, it works. We get an answer to the main question of “what went wrong?” without chasing answers to questions posed in the first half of the book about why the UN and the international community did not respond to the emergency at hand, or what was said in this or that secret meeting to precipitate events, or indeed the identity of Agathe’s assassins: “Dieu seul les connait” [Only God knows them] (30).

Against her detractors, he concludes that the accusations that she was a part of an earlier plot to get rid of Habyarimana are as unfounded as those that would have her in the know about his actual assassination. As proof, Butare gives the fact of her own brutal assassination, only hours later, and her lack of preparations for her own and her family’s safety in the aftermath. Against her uncritical champions, he points to her revolutionary zeal (123-4) which led her to forgive (or at least forget) violence perpetuated in the name of her main goal: quickly getting rid of Habyarimana. This he claims, was also her shortsightedness. She did not wish to delve into the more complex problems of Rwandan society. She thought leaving the past in the past would work (127). More concretely, and with the privilege of hindsight, Butare suggests that she might have followed De Gaulle’s lead and resigned from her post as Prime

Minister instead of escalating the show-down with Habyarimana, who was by that time a seriously wounded lion backed up against many walls (91-96).

In another subtler line of argument woven throughout the biography, Butare implies that she was also killed because she was a woman, and the horror of this fact is so unspeakable that it can only be recounted in poetic form. And so he does, recounting the moment of her death in a poem (28-9). He then goes back to give examples of how unprepared Rwandan society was at the time for her ambition, outspokenness, and tenacity. She is the gazelle who manhandled the lion, such as in Butare’s account of how she publicly humiliated Habyarimana on January 8, 1994 during yet another failed attempt to inaugurate the new government as per the Arusha Accords (87-88). More importantly, he suggests this was not for naught. Her feminism was an embodied one, from the time she was a girl. This is exemplified, backwards in time, through her engagement with SERUKA, an association for the promotion and active contribution of Rwandan women to development, since 1991, her work with FAWE (Forum for African Women Educationalists), and her boldness as a teenager who single-handedly broke the tradition of boys inviting girls to dance by walking straight up to the author and inviting him to dance with her.

Lastly, and also in a subtler vein, we are told that the problems of Rwanda at the time were not so much ethnic but regional, that the ones discriminated against during the Habyarimana years were “those from the South and the Tutsi” (113). Against a regime that favored the Bakiga, notably in terms of access to higher education, Agathe was able to reform the quota system based on region and ethnicity to make it based solely on merit. The story of the early 1990s is seen as a steady rise in the political manipulation of ethnicity in the name of regional access to the national pie. This is an argument that is often made by analysts of Burundi and Rwanda, and it is one I think we cling to because of some vague impression that it might be easier to decathect or defuse animosity based on territory harbored by a political elite rather than hatred based on blood harbored by the majority. But no matter how often and how loudly it is said, the denunciation of political manipulation does not seem to stop violence, and thus it remains an explanation that sits uncomfortably in an intellectual corner all by itself. In many ways, the notion that this is rather a “malediction that seems to pursue Rwandans, generation after generation,” (65) is a more concretely accessible and potentially cathartic interpretation.

All in all, Une Jeune Femme sur un Bateau Ivre : Agathe Uwilingiyimana du Rwanda is a poignant portrait by a loved one of a courageous, headstrong human being for whom “the word ‘abandonment’ was not part of her vocabulary” (93). She would go down with her “drunken boat.”