Trinity High: Back to School 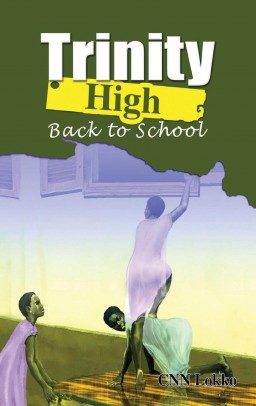 Trinity High: Back to School presents a remarkable portrait of life among high school girls resident in a fictional boarding house.

The setting is Ghana. The holidays are over and the atmosphere at the school ground is undeniably euphoric as students return to their dormitories. As the junior girls catch up on gossips and new slangs among their cliques, they are also wary about the senior students and their penchant for sending junior students on errands and unending tasks. Back to School, the sequel to Trinity High: Students-in-Crime, follows the friendship of two girls, Naa Atswei Richter and her friend, Sandra. It charts their adventures, conflicts, and most importantly, their quest for justice and fairness in some established practices of Trinity High seniors. For example, seniors impose fines for seized items. They also cut corners at the tap, when it’s not their turn to fetch water. The two friends detest these impositions, but sometimes, use unethical means to assert their rights or pay back for wrongdoing.

As characters, Naa Atswei, the protagonist narrator, and her friend, Sandra, compete against, but also complement each other in many respects. While Naa Atswei is perceptive but slow to act and slow to say “no,” Sandra is outspoken, feisty, self willed, and determined. She has no qualms about striving against the seniors of Trinity High to get justice. She knows her rights and demands it, her “junior” status notwithstanding. “That girl is bad news,” Naa Atswei’s mother warns her. Their friendship is sealed as both girls engage the indomitable senior girls in clandestine escapades. They successfully retrieve their seized bathroom slippers from a senior classroom, rather than pay fines; they also play a detective role in unraveling the case of the lost watch, thereby bringing the culprit to justice.

Trinity High: Back to School exposes the pros and cons of residence at boarding high schools in Ghana. It touches upon important issues of security, abuse, prejudice, fairness, and justice. However, despite the writer’s well-crafted and engaging dialogues, the story’s plot is unwieldy. Captivating suspense is minimal. Readers expecting hair-raising adventures and a satisfying climax may be somewhat disappointed. Furthermore, the characters appear one-dimensional, lacking in depth or complexity. Nevertheless, Trinity High: Back to School will captivate young readers interested in enjoying the experiences, gossips, and conflicts among high school girls in this fictional Ghanaian boarding school.