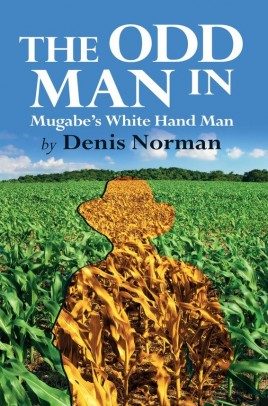 ONE OF THE MAIN surprises that followed Robert Mugabe’s overwhelming election victory (57 of the 80 seats open to Africans) in March 1980 was Prime Minister Robert Mugabe’s decision to appoint the Oxfordshire-born President of the Commercial Farmers' Union (CFU), Denis Norman, as the country’s first Minister of Agriculture.

Garfield Todd (Prime Minister of Rhodesia between 1953-1958) wrote to some of his friends – "Rejoice with us. On Tuesday March 4, 1980 Zimbabwe emerged from persecution and war with clarity of decision which has taken the world by surprise. Our happiness is so great that it has almost banished the fear and anxiety under which we have lived for so many years..."

Later, Mugabe addressed the nation and his message to the country’s worried, worn-out European community of around 200,000 was one of reconciliation and hope. And after much prodding from the colony’s last governor, Lord (Christopher) Soames, Mugabe appointed Denis Norman to his first post-independence cabinet.

Mugabe also brought his most important rival, Joshua Nkomo, in to government and there were four other ZAPU ministers and three junior ministers. To further re-assure whites that they had a future in the country, Mugabe appointed David Smith (formerly one of Ian Smith’s ministers) as Minister of Commerce.

The world applauded and within a matter of months, large sums of money flowed in like water, under the guidance (sadly, not for long) of the well-respected Finance Minister, Dr Bernard Chidzero.

If only South Africa would follow suit, chanted liberals around the world. Black power with white help.

This October, Weaver Press in Harare will publish a long–awaited and valuable book by a man who was close to the heartbeat of Zimbabwe politics during the early years of Independence.

And it is a part-record of some of the things that did go right and a sad reminder of the many, many things that went so pitifully wrong: the slaughter of tens of thousands of people in Matabeleland (Gukuruhundi); the collapse of medical and educational facilities and the Mugabe/Emmerson Mnangagwa/Perence Shiri organized invasion of white-owned farms after 2000; the collapse of organized agriculture; and the hyper-inflation that ultimately led to the abandonment of local currency in favour of the US $.

Today, Mnangagwa acknowledges that many things went wrong after the invasions and they must be dealt with immediately, with the man placed in charge of agriculture Perence Shiri.

Denis Norman’s memoir will be published with the engaging title of Odd Man In. The book follows the earlier publication by the excellent Weaver Press in Harare of Susan Woodhouse's “Garfield Todd – The End of the Liberal Dream in Rhodesia.” Perhaps these publications show that whites who played such a valuable role in both Rhodesia and Zimbabwe are coming out of the closet ( as it were ) no longer nervous about showing that white skins made magnificent contributions in black Africa.

DENIS NORMAN was one of Rhodesia’s best known farming leaders and for number years he was an admirer of Robert Mugabe. In an interview at his former home in Walberton, West Sussex, England after his decision to leave Zimbabwe in 2003, he told me that Mugabe was always open to new ideas.

"Look," he said, "I think I had an advantage because I came in to the Government from the farmers’ union. I wasn’t a politician and I never belonged to a party. But I’d been president of the union and that gave me certain knowledge about agricultural marketing, about research. I had all that knowledge available to me, so I could actually pass it on to him and I was always able to discuss things with him and with other Cabinet ministers. In a way I had an inside track. Generally speaking, ministers listened attentively. There was no animosity at all. It was a challenge because I was the first minister who had control over all agriculture. Prior to 1980, there were two ministers of agriculture: the Minister for Agriculture and Ministry of Native Agriculture. Quite rightly, I think, Mugabe abolished that and it just became agriculture. We took over the communal lands, which were called tribal lands in those days, and the whole thing was amalgamated into one ministry. It was a huge challenge. They did listen. Thankfully, on many issues they gave me support and agriculture grew very rapidly, particularly for the first five years."

Those were the good days.

Bad ones and then very ugly ones followed and in an interview on the eve of Zimbabwe’s first post-Mugabe general election (July 30) Norman told me from his new Oxfordshire home, close to where he was born on 26 March 1931, that he was “ heartbroken” when so much went wrong in a land he loves. “After those terrible farm invasions in 2000 . . . obviously they broke my heart. What I tried to achieve over two decades fell to pieces. I was devastated.”

His book tells part of that story and although he was – like so many people – an admirer of Mugabe in the 1980s he records the sad decline of a country that was once regarded as the breadbasket in the last resort of an entire region. He watches and waits to see what the new Zimbabwean government will do about land and food production.

Emmerson Mnangagwa has indicated in recent speeches that he wants white farmers to return and produce food and other foreign-exchange earning crops. Would Denis Norman of 2018 advise a young man – as he was when he left the UK in 1951 for a wonderful and adventurous life in Africa – to take a risk and run a farm in Zimbabwe today?

He laughs: “That depends entirely on the young man – what kind of risks he’s ready to take but in a way . . . yes, I’d say take a chance. Zimbabwe is a most wonderful country with the most wonderful people.

DENIS NORMAN has farming in his blood.

Born at Chalgrove Manor in the village of the same name in Oxfordshire in 1931 he was the second of three sons, born to faming parents.

Educated first at a tiny village school and later on at Bloxham School, he joined his elder brother John who was then working for Norman Sr. on the Midddleton Stony Farm, also in Oxfordshire, which the family rented from the Earl of Jersey. Today, that farm is owned by Denis’s younger brother, Jim. In 1951, John Norman had gone to work on a tobacco farm in Rhodesia and two years later, the same farm in Africa was looking for another assistant.

Norman applied, got the job and two years later in 1953, sailed away.

Odd Man In is an enthralling story about what happened next.

After Independence, Denis Norman was a household name – in European circles anyhow.

Denis and his wife, June, were seen by young farmers as role models, people who retained a European way of life while coming completely to terms with the reality of black political power in a country that had known such turmoil between Ian Smith’s UDI in November 1965 and Mugabe’s election win in March 1980.

Denis is a man who commands respect with two important qualities if you’re white and live in Africa – a sense of humour and an optimistic temperament. Both come across strongly in this enthralling trip down memory lane.

There are so many stories that make you cry and laugh.

Cry - The insistence by a man who has no reason to lie that neither he nor any other of the prominent white farmers knew what was going on in Matabeleland from 1983 to 1987 when between 20,000 and 30,000 men, women and children were slaughtered by Mugabe’s Fifth Brigade. At that time, Emmerson Mnangagwa was in charge of national security and effective head of the Stasi–designed CIO and Perence Shiri was in charge of the Fifth Brigade slaughter machine.

Laugh – A music hall comedy that sums up the warm, cozy relationship Communist dictators had with Mugabe during his years in power. It involves the five-day visit Rumania’s Nicolae Ceausescu and his wife Elena made to Zimbabwe in July 1983 as guests of the then head of state, Canaan Banana.

Denis writes, ”Mugabe asked me if I could accompany Ceausescu and his wife and a delegation to a commercial farm, to which I responded; ‘Which one?”

”The following day, I took them to a well-developed dairy farm, which was producing high-yielding crops under irrigation. The farm manager was very obliging, showing his guests around the property, which also had extensive facilities for his work-force, including a well-run primary school and a very well-equipped and staffed medical clinic. After a few hours it was time to leave and after handshakes all round, Ceausescu turned to me and through an interpreter said: ‘I like it; I will take it.’

“I was extremely flabbergasted”, writes Norman, “and said it was not for sale, to which he replied, he didn’t want to buy it, just take it. I reported back to Mugabe who asked me how I had left the situation. I told him about Ceausescu’s remarks and said that I was extremely surprised but felt that a non-committal answer was the best response; and as Ceausescu was his guest, I suggested the problem was now his. I do not know what passed between them subsequently but I got the impression that the relationship quickly cooled considerably.”