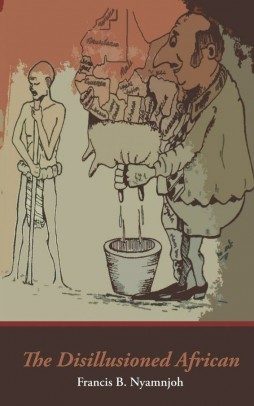 Cameroonian anglophone novelist and anthropologist Francis N. Nyamnjoh in his novel, The Disillusioned African, satirizes the stereotypes produced by the discourse on Africa and critiques the relations between whites and black elites.

Published in 1995, The Disillusioned Africans consists of letters about the observations and experiences of a black student-academic living in London in the 1980s. The novel brings up many issues that determine the present and future of the continent, from the African discourse to the administrations in the postcolonies.

On his journey from Europe to Africa, Nyamnjoh draws attention to how this black-and-white dichotomy is not racially but socially constructed in the minds.

“The white man’s crusade against his black counterpart was conducted from all sorts of angles – religious, cultural, political, economic, etc. Have you ever stopped for a minute to ask yourself why everything negative tends to be associated with blackness, and everything positive associated with whiteness? Let me enlighten you before you are embarrassed with the question by one of your inquisitive children. You’ve heard of

black magic and white magic, haven’t you? You’ve told lies that were described either as white or black, haven’t you? In primary school we both learnt of the black knight and the white knight, didn’t we?” (80).

Nyamnjoh seeks to establish a true relationship between the idea of blackness and the dark images constructed through centuries in the public. He ironically tries to explain why everything black is perceived as negative, while underlining the role of ideological and discursive structure in such an invention.

“Of course, you know of terms such as blackmail, black propaganda, black humour, black comedy, black look, black cloud, black mood, black sheep, black market, Black Death, Black Country... Why do you think that the whites have decided to conduct such a smearing and damaging campaign against a seemingly innocent colour - black? Why must everything negative, violent, harmful, sinister or antisocial be perceived as black? And why, for instance, must the first move in any game of chess be white? Of course, some would argue that all cultures have always associated black with despair and white with bliss. I don’t deny that, but I do question the racist innuendos and Darwinian undertones that have perverted White utilisation of the symbolism”(80-81)

The narrator’s questioning makes lots of sense here. As I mentioned before, Africa has no entity on its own, it is not a free-subject. African discourse is surrounded by ideological, cultural and anthropological boundaries. That’s why, the fact that black is absolutely negative and accepted in this way also brings up a sort of racist symbolism.

“Nothing man-made is neutral, and this includes language...” argues the narrator.

Tracing the history of the master-slave equation in the way blackness is constructed, the narrator argues that the attractiveness of whiteness can be explained not only by color but also by the fact that it is positioned at the center of the power:

Taking the black-and-white dilemma as a power relationship, Nyamnjoh wants to emphasize the privilege of white image ideally produced by colonialism. On the other hand, he thinks that black people's desire to become white is a kind of mental mimicry as being wealthy and exploiting. Here, however, we witness that the mimicry strategy Homi K Bhabha reads through the "gaze", here, turns into extremism and a form that makes everything material.

“How elated they are, childishly, to have a house in Europe or America, where they can afford to live better than the middle-class white that stubbornly claims to be superior to them! How can the middle class housewife in the West claim superiority, when every bank holiday she jostles in the giant supermarkets with the wives of African Presidents and Ministers, who have flown over specially to shop at Oxford Street and to have their hair retouched? How many so-called superior whites are in the financial position to buy off designers’ rights for particular dresses, in order to stop other women dressing like their wives? How many of their wives or mistresses can boast of a thousand pairs of shoes and more, or rings of ruby, diamond and sapphire?” (46).

The narrator also mocks the false pride that the profligate, unsatisfied African elites are consoled with. We clearly see the arbitrariness and extravagance of autocrats what Achille Mbembe addresses in the postcolonies, in Nyamjoh's novel.

The narrator gets to the point, revealing that, “No matter what they might say to the contrary, the ‘modern’ African elite still acknowledges his supreme inferiority to the white man?”

Nyamnjoh also demonstrates how the desire along with power and wealth had been fetishized since colonialism.

The target of the resistance was clear in the colony, but in the postcolonial situation, the resistance lost its meaning, black comrades and libertarians faced the same difficulties as before in the regime of black identity this time, and the organization of the independence struggle in the name of nationalism raises the following questions:

As long as nationalism has an essentialist character, isn't it a narrowing and betrayal concept? Doesn't what Gayatri Spivak calls "strategic essentialism" stem from the necessity of such short-term structures? Or is the main problem perhaps the flirting of nationalism with racism?

Africans happened to believe the power of national consciousness in the freedom movement, but it produced despotisms instead. Frantz Fanon's warnings against the danger of nationalism turning into violent regimes, in a sense, became much more meaningful in the practices of postcolonial states. The narrator, who considers the liberation of African countries from colonialism as “flag independence”, laments that how great hopes were replaced by a real disappointment:

“The white Masked Dancers withdrew to the background and were replaced by their shadows, the black pawns. The dance of the puppets was on. But instead of getting better, things worsened. Instead of democratic abundance and populous grandeur, the masses could barely scratch a living under a scorching dictatorship” (29-30).

What Nyamnjoh discuses is the very public situation that Mbembe in his work On The Postcolony suggests as a "postcolony". Because the elite blacks' commandment in the neo-colonial system did not change the position of the blacks, but worsened it.

“The African elite today loves the kingly life so much that, at independence, what mattered to him most was political, not economic power. Economic power was largely retained by the Europeans and expatriates, which is why the leaders suck the peasants like ticks in order to sustain their kingly appetites. Had the African leaders been sensible enough to think seriously of economic power as well, African countries today would certainly not be this dependent upon the unmechanized efforts of the peasants. And they would also be in a position to carry out their own development efforts, without necessarily posing as “Les Mendiants du monde.” “Beggars of the world, unite,” Marx is likely to have written, had he been born in Africa” (97-98).

“Perhaps the black man is inherently a power-monger,” the narrator adds.

The Disillusioned African is a critique of postcolonies which structured during decolonization and its African elites.

Ahmet Sait Akçay is a Turkish Literary Critic and Short Story Writer. This review appeared in Turkish on Independent Turkish website has been translated into English by the author himself. For the original please visit https://www.indyturk.com.