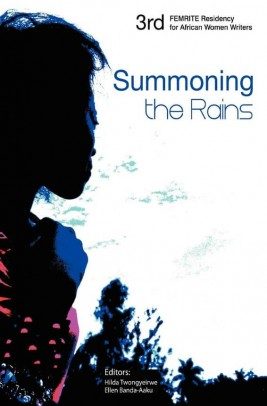 Summoning the Rains is a collection of twenty stories by women writers from eleven African countries, stories which emerged from FEMRITE’s third annual Regional Women Writers Residency in Uganda.

There are a number of particularly strong, striking stories here which I would recommend to anyone interested in new short fiction, particularly those by Tanya Sam Chan, Isabella Morris, Sylvia Schlettwein, Wame Molefhe and Mamle Kabu. The collection would also make a valuable addition to courses on Development and Women’s Studies, due to its accessible and insistently human depiction of a wide range of contemporary African women’s experiences—which, of course, should not be so special a recommendation as it is.

This is an engaging, delightful and frustrating collection. Much of what is both fascinating and problematic about Summoning the Rains seems connected to the label that waves banner-like over this book: African women writers. These stories illuminate perspectives which are still too often silenced and flattened. This means that even those pieces which are less arresting as fiction will nonetheless enrich and enlarge Western readers’ understandings of African women and girls. Yet the marginalisation and intersecting oppressions which make this book so valuable and interesting also seem to inhibit and fetter many of the stories’ reach and vision—although some of this may, more simply, be a matter of new writers developing their craft.

In these stories we encounter women and girls whose lives are circumscribed by patriarchy, violence, poverty. They are testing their strategies, uneasy mixtures of accommodation, investment, resistance and escape. They have a lot to lose, and isolation haunts these stories. In story after story, intimates stare at each other with wounded incomprehension. Of course, the political is personal, and the personal is political—played out as paradoxical connections and painful refractions. The collection opens on the eve of Bechaunaland’s independence and closes in a Ugandan refugee camp. In these stories, Gothathaone Moeng and Beatrice Lamwaka explore twisting, shifting parallels between individual and national freedom; between marriage and interethnic healing.

While realism is by far the dominant mode in Summoning the Rains, two of its strongest stories venture into the realm of the fantastic, to powerful effect. Tanya Sam Chan’s “Flesh to Flesh,” in which an AIDS nurse tries to accept her daughter’s sexuality, is a daring and increasingly strange exploration of emotional switchbacks. Chan’s sparing use of the fantastic hardens rather than softens the impact of her social realism, creating a sense of traumatised dissociation. Chan’s is perhaps the most shocking of the collection’s meditations on mother/daughter hostility, showing the process by which a mother’s rage against the world’s injustices and dangers may become rage against the daughter who cannot or will not be protected.

“Mother of the Beast,” by Sylvia Schlettwein, is a hard-bitten veldt fairytale about Ingemar Jansson’s tragic love for her son, the talking jackal Waldemar, who leaves home to become a Namibian singing sensation. As he departs, he tells his mother, “Don’t wish me luck and don’t cry. I am a wild animal, after all. You shouldn’t get too attached.” Although it is tempting to read the interspecies devotion and wariness as a (rather unsettling) racial allegory, especially as the farmers who raise the jackal are white, Schlettwein seems more interested in the processes of becoming-human and becoming-jackal. Waldemar the changeling, the werewolf-in-reverse who effortlessly masters language and song, calls into question the humanity of his parents who barely speak and who become, like the land, “dry and harsh and unforgiving.” To adapt Wittgenstein, if the jackal could speak, would we understand him? If husbands and wives could speak, if parents and children could speak, would they understand each other?

Isabella Morris’ “In the Shadow of the Blue Bus” also describes a family mired in silent frustration and disappointment: “The house we lived in should have been warm and bright…But the long shadow of the 60-seater bus that stood on its rusted wheel mountings outside our front door hung over our house…” Morris unfolds her tale slowly, revelling in fine-grained observations. In a particularly haunting scene, the boy spends and afternoon in town at Mr. Venter’s Bike Emporium, watching an old man slowly fixing a puncture. “‘Which one do you like?’ my father asked, the question making me delirious with hope. I raised my hand, ready to point at the blue one with the long, thin seat and the high handlebars, but my father had already turned away.”

Gender, violence and education dance round each other in Wame Molefhe’s witty and moving “States of Matter.” Though her mother says that “A good woman must be solid,” the daughter insists “I’m free like a gas, Mama, and I’m going to stay free forever.” When an increasingly controlling lover’s attempts to ‘turn her solid’ land her in hospital, her mother appears at her bedside reading A New Certificate in Chemistry “in a strong voice, ploughing through terms I knew she did not understand.… Uncombined hydrogen does not occur in nature to any appreciable extent, but the element occurs in vast quantities in a combined state…” The mother’s uncomprehending—yet deeply understanding—recitation transforms science (at once rational and magical) into a litany of healing and offers one of the collection’s rare moments of loving connection and solidarity.

In “Beauty,” one of the collection’s most impressive pieces, Mamle Kabu confronts with witty and moving directness the intersecting oppressions that weigh on African women’s fiction. Kabu arms herself with a protagonist, a Ghanaian development worker, Christie, who is more than capable of grappling with the questions—of patriarchy, poverty and social change—which haunt many of the texts in Summoning the Rains. Women’s writing—and the education, confidence, access and resources it requires—is a development issue and a social justice issue.

Kabu demonstrates that fiction can be a natural, necessary partner of activism and analysis. In this story of a ‘Women’s Focus Group Discussion’ and its repercussions, Kabu shows us moments too tender and confusing to be couched in academic prose: “she tried to dismiss it as one of those many less than lucid interview moments which never made it into a report and were quickly forgotten. But it pulsed all around her, even after she had left Benin…” “Beauty” is a ringing call for women’s education, a hopeful message about the possible rapidity of change—yet at the same time Kabu very subtly reveals the ways in which the agents and tools of such change (for example, a Ghanaian female academic) may be tempted into complicity with existing power structures. Watching a roomful of women, Christie’s imagination “tried to penetrate their serenity, conjure up the unspeakable. The forcing apart of their legs, the metal blade that sliced into, sliced off, their softest parts…” Even sympathetic attempts to grasp the realities of another’s oppression may, Kabu suggests, come worryingly close to re-enacting violations. Kabu does not foreclose the possibility of understanding, however, and her story—intelligent, confident and touching—is beautiful.

If we follow Kabu’s example then, it is no insult to suggest that one of the undeniable strengths of Summoning the Rains is the extent to which it will expand readers’ understandings of contemporary African women, although we must (as Kabu also warns) be mindful of the ways in which empathy and othering can become intertwined. Summoning the Rains and the FEMRITE Residency which produced it are valuable contributions to the fight to win for African women the freedom, space and peace to develop their voices more fully, to practice and hone their craft, gaining the confidence to take their writing further and deeper.