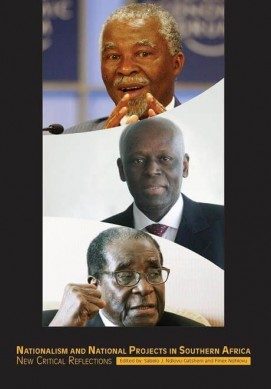 This is one of the best compilations of essays on Southern Africa I have read in a long time. Although a wide range of views are presented in 18 chapters by 19 writers (including the two editors), there is, as the title suggests, a common thread that runs through these essays.

Since the rise of the “nation-state” in mid-16th century Europe, nationalism has been a contested site. It expresses itself in many forms, its worst expressions being racism, colonialism and fascism. The book deals with the first two, and the struggle against them. Their most challenging expressions are the “National Project”, and a slightly different concept the “National Question” (NQ).

At the global level, it is correct to say that the NQ is still an unresolved national project. Frantz Fanon, quoted by several writers, described the emergence of “narrow” (petty bourgeois) nationalists who took power after African countries won their political independence. Political independence was of course a significant development (for it opened the door to internal democracy), but at the economic (or material) level Africa is not yet free from the dictate of the colonial Empire.

There is a healthy debate in these pages on the subject of coloniality, neo-coloniality and de-coloniality. It is a vast complex subject. I agree with those who have argued that whilst colonialism was a historical phase, coloniality is an embedded structure. It manifests itself primarily at the economic level, but some of its worst manifestations are rooted in the existing power structures and their ideological expressions. One of the editors puts it well: “The final tenet is control of subjectivity and knowledge involving epistemic colonisation …” (p.101)

I have lectured up and down many universities in Europe and America, and I can provide evidence of “epistemic colonisation” even among academics. At Oxford (where I live), for example, I attended a seminar where a Ph.D. student presented a thesis on the “Ethnic Factor in Kenya’s Politics”. Apart from missing other dimensions (such as class, gender and religion), the bibliography at the end of the dissertation had not a single reference to a Kenyan or African writer. And this is not an isolated case. Teachers and students in Western universities simply assume that all knowledge on Africa comes from Euro-American writers.

This book provides an alternative narrative.

When you move away from the “National Question” at the continental level, and get down to the country and sub-national levels, the questions of identity and citizenship loom large. The 1884/85 Berlin Conference that cut up Africa into bits and pieces irrespective of ethnic, language and religious divisions left behind a legacy whose footprints still deface the body-politic of Africa. The African Union (then called the Organisation of African Unity) wisely decided not to disturb the colonially drawn artificial boundaries. But the ghosts of identity and sub-nationalism are not assuaged. Take the South Sudan. Its independence in July 2011 unleashed fierce underground forces that have devastated the lives of millions of innocent men, women and children. The scourge of sub-nationalism lives on.

Kwame Nkrumah had argued that the only way would be to create a “United States of Africa”. Julius Nyerere suggested a less ambitious project – one based on creating sub-regions as a first step to a continental unity. But Nyerere later conceded that even that route is fraught. The editors of the book quote Nyerere thus: “And the truth is that as each of us created his own state we raise more and more barriers between ourselves.” (p.17). The dream of Pan-African unity recedes well into an undefined future.

The barriers are not just at the national and sub-national levels. There are also other barriers. In the paper on “Gendering the African National Project in the Twenty-First Century”, the two writers put their fingers on the right spot. Women, they say, perform "culturally scripted roles in national projects" because "the African continent is patriarchic." (p.230) As long as women play role of motherhood, they remain "adjuncts to men in national project". (p. 223)

A concluding thought: There is only so much that a book review can do. It can only give a glimpse of the richness of the dialogue that its 360 pages contain. The book should be on the reading list for courses on the Political Economy of Africa, Development Economics, and International Relations at universities. It would also do well in the library of journalists and other analysts.

As a reader, I would have liked to see a separate section on the role of leadership in Africa’s struggle for emancipation from the continuing domination of the Empire. Also, an index at the end could have facilitated cross-references for the readers.

But, no matter what, the editors have brought together a vast compendium of knowledge that challenges the Eurocentric “epistemic colonisation” of Africa. Africa still has a long way to go to resolve the National Question.