My Life, My Purpose. A Tanzanian President Remembers 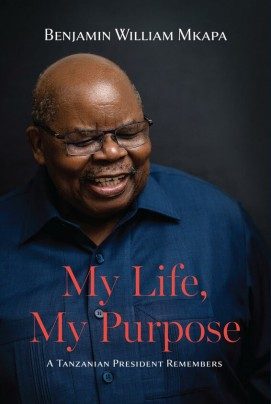 My Life, My Purpose is the memoirs of Tanzania’s third president, Benjamin Mkapa. President Mkapa takes the reader on a journey from his childhood in rural Mtwara to post-presidential semi-retire­ment. He is not reluctant to offer opinions on a range of topics along the way.

The book can be split roughly into two halves. The first half details Mkapa’s rise to the presidency. Among other things, he discusses his edu­cational journey, his time as a newspaper editor, his work as President Julius Nyerere’s press secretary, and his role as foreign minister. Often in political memoirs, these sec­tions can be a preamble before the most interesting parts begin, but this is not the case with Mkapa. His decision to write for a general audience, not necessarily familiar with Tanzania, means that he explains a lot of interesting social and political history while covering his life story. Combined with a very clear writing style, this makes these early chapters very engaging.

In this section, Mkapa shares many stories about Nyerere and their time work­ing together. Indeed, one of the stated objectives of the book is to present a new perspective of his former mentor. However, he ultimately fails to leave the rather well-trodden ground of universal praise (often described as hagiog­raphy), and it can feel like the reader is being given a picture of Nyerere the myth rather than Nyerere the complex human.

The second half focuses on Mkapa’s time as President. Much of this section is dedicated to detailing the wide-ranging reforms that his administration introduced as a response to Tanzania’s precarious economic position, which generally represented a shift from socialism towards capitalism. Perhaps out of necessity, the book loses some of the flow of earlier chapters as Mkapa increases the level of detail while explaining who did what during this ambi­tious policy programme.

This half also deals with some of the criticism that Mkapa faced during his time as President. He offers explanations as to why he thinks his leadership style was sometimes described as arrogant or dictatorial. He also dedicates a section to addressing the various corruption scandals to which he was linked. His response to criticism about being too close to the IMF and World Bank is particularly well thought through, although there remains a tension between Mkapa the socialist in the first half of the book and Mkapa the capitalist in the second half, which is never satisfactorily resolved.

One of the major objectives of the book, which was written due to encourage­ment from the UONGOZI Institute, is to inform and inspire new leaders. As a result, the memoirs contain a lot of advice about how both leaders and those setting out on their careers should conduct themselves. In much of this discus­sion it is unsurprisingly Nyerere that is presented as a role model. Mkapa also draws on his experience to give frank and often insightful views on recent developments in fields such as the media, the civil service and democratisation.

As is generally the case in political memoirs, Mkapa uses this book as an opportunity to defend various aspects of his legacy. In doing so, he is able to point to several major improvements in key developmental indicators during his time in office, which are further outlined in a statistical appendix. However, some of his other points are less persuasive. He exaggerates the success of some plans, initiatives and newly created agencies, downplays a few of the issues that reflect badly on him, and occasionally presents weak excuses for poor performance in specific areas.

Nonetheless, this book will be of interest to most readers of Tanzanian Affairs. Mkapa’s memoirs span the whole history of Tanzania as a nation, and he was involved, in some capacity, in many of the country’s most significant events. Insider accounts such as these are most welcome.