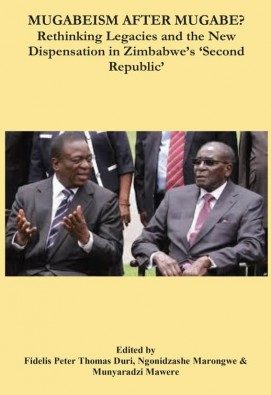 Although the history of military coups in Africa is filled with military-led authoritarian rule, it also includes cases of reform and democratization, made possible by military intervention. One of the most striking examples of “good coups” was the intervention of the army in Zimbabwe in November 2017, forcing Robert Mugabe to resign after nearly 37 years in power. The general public who had suffered under Mugabe’s authoritarian rule may have welcomed the intervention of the army, describing it as a "good coup", but evidence indicates that the military elite interfered in alignment with their best interest. The officers who oversaw the coup appointed/released power to Emerson Mnangagwa, who was a close ally of Mugabe and enjoyed the support of the army. This may call into question the possibility of democratizing Zimbabwe and may that may lead to the establishment of a Second Republic.

The book Mugabeism after Mugabe? Rethinking Legacies and the New Dispensation in Zimbabwe’s ‘Second Republic’ tries to provide a panoramic view of the most important issues and challenges facing the philosophy of “Mugabeism” after the departure of its founder. Throughout its 12 chapters, discusses the issues of Mugabe’s ideology, the problems of democratization, good governance and development, health issues, land issues and the oligarchical nature of the ruling elite. In addition, the book outlines the lessons learned from Mugabe's rise and fall, whilst addressing the question of why African presidents often have long reigns in power.

The first chapter introduces a theoretical and conceptual framework for Mugabeism by distinguishing between two post-colonial historical periods in Zimbabwe. Although some believe that Mugabeism is still a ruling doctrine despite Mugabe's departure, Mnangagwa argues that 2017 marks the beginning of a second republic, on the same date as the fall of the first republic founded by Mugabe in 1980. This chapter provides the historical and intellectual context for the various issues studied in other chapters. For some, Mugabe will always remain a hero who brought independence and an end to white-minority rule. Even those who toppled him blame his wife and the “criminals” around him, yet all chapters of the book build up to the notion of Mugabe's catastrophic rule, as evidenced by political persecution, economic decay, and widespread poverty. The continuity of Mugabeism reflects a great deal of political expediency in order to attract the voices of those sympathetic to Mugabe. In addition, it was politically appropriate for the opposition to praise Mugabe for some of his successes as a way to discredit Mnangagwa. Moreover, the Second Republic deliberately avoided discrediting Mugabe by denying the charge of the military coup, a situation that would have shattered any hopes of ending international isolation.

The second chapter addresses the dynamics and mechanisms of national governance, namely, establishing democracy and fostering development in light of the Second Republic. The Second Republic was established in November 2017, with the military coup and was legalized during the July 2018 elections. Much like the Egyptian case in the wake of the overthrow of both

Mubarak and Morsi, the coup against Mugabe was met by the general public with a ceremonial mood in support of the army. For most Zimbabweans, Mugabe's demise (also the First Republic’s demise) was the end of an era of dictatorship and tyranny. This chapter argues that, as much as the Second Republic fostered national optimism, it is nothing more than a continuation of the First Republic. Although not present in person, Mugabe’s flawed political system, which is based on the principle of personal rule, one-man dynasty, patronage and clientelism remained almost the same.

The chapter further argues that, since November 2017, Zimbabwe has become a country run by parasitic political elites and military predators. Their influence is made possible with the help of the bureaucratic bourgeoisie who embezzled millions from state coffers while adopting a new liberal economic language. The Second Republic also announced that the country is open to business, but that it is not yet attractive to foreign investment due to poor financial policies and weak local currency. Arguably, the promised paradise turned out to be a random, confused and dilapidated governance with arbitrary imprisonment, violation of human rights, increased unemployment and starvation of the population.

Chapter 3 analyzes efforts to lift isolation and reconnect with the international community which appear to be failing. This is illustrated by the so-called mega deals by President Emerson Mnangagwa, which were actually a continuation of Mugabeism. By April 2018, Zimbabwe and many economic partners from all over the world signed a set of mega deals valued at $ 8.7 billion USD. These mega deals may have the transformational capacity to redirect Zimbabwe on the path of economic growth, prosperity, and overall socio-economic development. However, over the first two years, very little of the highly publicized re-engagement efforts has been achieved. The Zimbabwean leader and government officials have been involved in expensive diplomatic trips to some major and sometimes dubious foreign destinations such as the United Kingdom, the United States of America, Russia, Kazakhstan, Belarus, Azerbaijan, China, Qatar, and the United Arab Emirates, where some mega deals were concluded. Chapter Four discusses the public healthcare challenges facing the Second Republic, especially from Robert Mugabe's pervasive legacy.

Moreover, Chapter Five studies the land issue in Zimbabwe, paying particular attention to the extent to which the policies and practices of the Second Republic deviate from the policies of its predecessor. As a starting point, the chapter focuses on the Mugabe fast-track resettlement program starting in 2000 to illustrate how the country has plunged into many social and economic crises. The chapter explains how, Mnangagwa sought to abandon some of the disastrous aspects of the fast-track resettlement program when he came to power. He, for example, reduced violence in settling land disputes, recovered some expelled white farmers, set up measures to compensate some of the displaced white farmers and expelled some people who illegally occupied lands. Chapter Six presents a sociological vision of the philosophy of political violence through the legacy of Robert Mugabe.

The authors believe that Mugabe is still the ghost that haunts the people of Zimbabwe. The writers, researchers and leaders of public opinion have agreed on the need to eliminate this ghost, or at least shed more light on it. Mugabe has a heavy legacy of dictatorship, entailing the hegemony of political violence and human rights violations. In the context of this chapter, the concepts of political violence and human rights violations and the correlation between them are analyzed. Chapter Seven explains how food aid was central to Zimbabwean politics not for the purposes of social justice and empowerment, but as an instrument of domination, favoritism, and dependency. The chapter examines how relief materials have been used as a political weapon by the ruling ZANU-PF party in a multifaceted attempt to reward its loyalists and lure potential voters

while punishing those in the opposition. The analysis was based on a historical pre-colonial vision when the traditional Shona chiefs were seeking to provide assistance to needy people during a drought. This chapter has shown that partisan food distribution was one of the primary characteristics of both the first and second republics in Zimbabwe.

Chapter Eight discusses the issues of change and continuity in Zimbabwe after Mugabe's departure. Globetrotting is a common feature of Mugabe’s and Mnangagwa 's reigns. Regardless of the economic crises facing the country during Mugabe's rule, the nation was complaining about his frequent travels abroad, as he often traveled to countries such as Cyprus, Italy, Britain, Brazil, Malaysia, and other destinations. The common perception of these trips is that they were special- purpose trips as Mugabe stayed abroad more than the stayed in his country. He was accompanied by dozens of officials, assistants, bodyguards and family members. In 1990 alone, Mugabe was reported to have made official visits to 16 countries within 14 weeks outside the country. Mnangagwa 's behavior has not changed from his predecessor. Within 16 months after assuming power, he visited countries such as Russia, Rwanda, Belarus, Guinea, Azerbaijan, Kazakhstan, South Africa, Switzerland, Angola, Zambia, Namibia, Ethiopia, Botswana, Mozambique, Mauritania, Tanzania, Botswana, the United States, the Democratic Republic of the Congo, China, and others. Chapter Nine, in turn, traces the history of the ZANU-PF National Front of Zimbabwe, including its rise to political power in 1980 and its subsequent transformation from a peasant-led guerrilla movement to a repressive elite entity dominated by Robert Mugabe, a dictator with an agenda Deceptive African Marxism and patriotism. Chapter Ten then provides an important analysis of the 2030 vision and efforts to combat corruption in the Second Republic. However, the analysis seems pessimistic about the dream of "Vision 2030" as it may die in its embryonic stage. Embezzlement of funds, ghost workers, bribery, and nepotism are still features of the current regime in Zimbabwe.

Chapter Eleven discusses the changes adopted by the Second Republic and the reaction of Zimbabweans to the new government. In general, the chapter argues that mistrust on the part of critics of the Second Republic undermines the reform agenda which seeks to improve the standard of living for Zimbabweans. Chapter Twelve introduces an important addition as it raises some crucial issues that affect the political reform process in Africa in general. Mugabe's fall is discussed in the context of the African principle of personal rule. Many African presidents have fallen victim to Personal Rule Syndrome and consecrate power in their hands, including Paul Biya, Teodoro Obiang Nguema and Yoweri Museveni. There is no doubt that the failure to resolve the political succession mechanism has exposed African presidents to the risk of being expelled from power often, as has happened to Robert Mugabe and many others, despite the presence of cases in which some powerful men voluntarily surrendered power after many years in power, like former president of Angola Jose Eduardo dos Santos in 2017.

This raises the question, why do African presidents cling to power for decades? There are several possible reasons why current African presidents are reluctant to step down from power. Perhaps the most important reason is fear of defamation and prosecution, nationally and internationally. The fear of international prosecution has become an important factor in explaining the refusal to step down from the presidency in Africa, especially after the activation of the Rome Statute of the International Criminal Court, which appears to have targeted African leaders. Another reason is likely to be the fear of giving up guaranteed luxury.

Overall, the book examines various political, economic, social and healthcare issues from interdisciplinary perspectives that pose a challenge to the Second Republic in Zimbabwe. By adopting historical and social perspectives, the various contributors to this monumental work

traversed the effects of Mugabe’s legacy on the Second Republic. Scientific analysis of the situation in Zimbabwe by various contributors sets a foundation for prospective research on the challenges of political reform and democratic transition in Africa in general. It is also possible to get an important result from the Zimbabwe lesson.

Elections are important in the process of political and economic reforms since they bring a new spirit into the structure of the ruling system, foster a plurality in voices and visions, and increase public participation. This also reflects the ability of the crisis and the opposition to lead the process of political change. Therefore, the prospects for political reform and democratic transformation sought in Africa should not be focused solely on the technical aspects of the elections but should also be based on the forms of social organizations and movements that express the urgent demands of the African people.