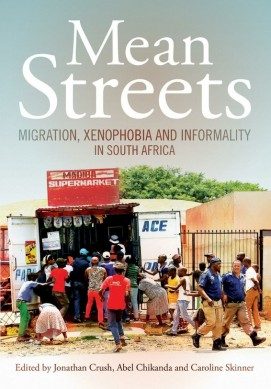 Mean Streets: Migration, Xenophobia and Informality in South Africa draws attention to the fact that some of the most resourceful entrepreneurs in the South African informal economy are migrants and refugees, despite the dangers they face in trading on the streets. Kate Dawson describes this as a landmark volume in the growing literature on African cities which brings into sharp focus the conceptual cornerstones of the subject.

While often critiqued for its limited capacity to grasp complex realities, the idea of the informal economy is deeply embedded in both academic and policy circles – and therefore one we can expect to stick around for some time. For this reason alone, publications like Mean Streets: Migration, Xenophobia and Informality in South Africa, which throw vast empirical light on what are sometimes considered ‘saturated’ topics, is absolutely fundamental in critically engaging with how we talk and think about the economy, how policy gets made, and crucially, how we understand the ways in which people make a living in many of the world’s urbanising spaces.

By detailing the practices of migrant entrepreneurs, the authors seek to refute the dominance of xenophobic discourses, which situate foreign entrepreneurs as engaging in unfair competitive practices that put South African citizens out of business. As the authors show, such discourses have culminated in targeted violent attacks, in and outside of the events of 2008. Equally, the authors argue that national policy reflects limited understanding of the complexities of the informal economy and consequently disadvantage non South African businesses.

Through thirteen empirically rich chapters, we are presented with the sheer size and diversity of activities and practices in the informal economy – ranging from Somali spaza shops in Cape Town, to guanxi networks across Chinese shops in Johannesburg, to transportation and remittance flows to and from Zimbabwe, and retail practices in Jeppe, inner city Johannesburg. Perhaps most striking is the documentation of the severe challenges facing foreign migrants and refugees in establishing and maintaining their business – where the authors detail the difficulty of obtaining start-up capital, harassment from officials and fears of ongoing xenophobic violence.

Each chapter presents a particular case, with a clear methodology that allows the reader to see the vast sectors of the economy and sheer number of respondents captured in the research. Each case brings into view the complex web of actors, policies and geographies that defy any easy distinction between the formal and informal and hint at the ethnic and gendered complexities embedded in these activities.

Mean Streets speaks to a growing literature on African cities, which documents the role of networks in facilitating livelihood strategies in the face of extreme uncertainty. For example, Simone’s (2004) notion of ‘people as infrastructure’ is an important way to attempt to grasp the complexity of such activities and how things actually get done in the city. Mean Streets brings into sharp focus the conceptual cornerstones of this literature – a fundamental step in formulating meaningful policy.

We see for example, the role of guanxi networks that facilitate the transmission of information between Chinese shops in Johannesburg and work to establish long-term supply chain networks. In Cape Town’s Somali spaza shops, the author explains the role of coordinated transport practices to reduce costs, while in Jeppe, the author argues that the social networks between formal shopkeepers and street traders are crucial for both parties. These networks are hard to pin down and the empirical complexity detailed in Mean Streets suggests that any further research on the informal economy needs to think creatively about its methodologies, as well as be open to seeing things from multiple vantage points.

Essentially, what Mean Streets reveals is a need for an expanded language and new analytical categories that reflect the multifaceted reality of the situation. Perhaps limited in this way, Mean Streets would do well to bring together its many reflections and offer an alternative way of understanding these multiple economies. By hinting at a new conceptual language, we are therefore able to move beyond simply discrediting the existing discourse and work towards shifting the discourse in the ‘right direction.’

We are also left intrigued about how various migrants relate to each other. We might ask, is there any inter-group recognition? Is there mutual support, understanding or cooperation? If so, could this indicate there might be scope for grassroots action to secure rights or make political claims? In other words, is there scope for transformation to take place ‘from below’ alongside shifts in macro policy?

A good book raises more questions than it provides answers. In the case of Mean Streets, the reader is presented with an empirically rich array of examples that compel us to ask more questions about the diversity of players, practices, policies and discourses that shape our understanding of, and crucially, our ability to harness the potential of South Africa’s multiple informal economies.

Kate Dawson is a doctoral researcher in LSE’s Department of Geography and Environment. This review appeared on Africa at LSE April 15th 2016.