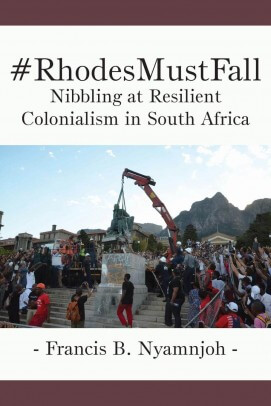 There is a deadly national game going on. It is the sport of spotting and stopping the amakwerekwere, naming and shaming the Mozambican “Shangaan”, taming and maiming the Nigerian, stealing and looting from the Somali businessperson, exploiting the Zimbabwean waitress and abusing the Basotho domestic.

The purpose of this national hobby is to ensure that noncitizens do not invade the sacred borders or violate what Nyamnjoh calls the imagined “borders of intimacies”.

But the national anti-kwerekwere pastime is also deadly. Among the targets of recurrent societal fits of anger, often performed through the increasingly violent theatre of protest action, are “government installations” such as libraries, schools, clinics and municipal offices. We must add the amakwerekwere to these targets.

Are these buildings perhaps considered in some communities as “foreign objects”, to be removed and expunged like the amakwerekwere? At what point will communities take ownership of them?

African foreigners are often harassed so that they do not “violate” the deeply flawed racial and ethnic purities that are artificially cobbled together. It is on these stitched-up identities and invented ethnicities, constructed with the malleable clay of citizenship in fictitious African states created by Europeans in Berlin in 1884, that the citizen-versus-kwerekwere binary depends.

At the heart of the vaunted South African black citizenship – which is used as an alibi behind which African foreign nationals can be beleaguered, persecuted and killed for no reason other than that they are “not citizens” – lies a notion of blackness which is piggybacked on theories of degrees of absorption into whiteness. At their most vulgar, the latter show up through such acts as skin bleaching and surgical nose sharpening in order to acquire the Caucasian look.

The prevalence of the stereotypical dark-skinned African kwerekwere is neither innocent nor accidental. Similarly, it is no laughing matter that a number of dark-skinned South Africans are routinely mistaken for illegal amakwerekwere, by black police officers nogal, with some of the victims spending nights in prison while others mistakenly get “deported” back to Zimbabwe.

Hierarchical notions of blackness, in terms of which the South African black person, presumed to be the lightest-skinned of all, occupies the top spot on the pyramid, are clearly at work here.

Consider, for example, the often unspoken assertion of the superiority of English, a borrowed colonial language often deliberately construed as a local language and often used, quite unashamedly, as a key distinguisher of citizen over kwerekwere, civilised over uncivilised, educated over uneducated and intelligent over stupid.

More genuinely local languages such as isiZulu, isiXhosa and Sesotho are also used as markers and testers of who is citizen and who is not. And yet the fact that these languages are intimately related to many other languages spoken in sub-Saharan Africa is an indication that they are probably more African than they are South African.

The very label kwerekwere is a parody of the noises supposedly made by noncitizens when they speak in their languages – many of which are closer to indigenous South African languages than English, French and Portuguese are.

It is uncanny how indebted to European ideas black South Africans are in many of the things they depend on to distinguish themselves from their fellow African amakwerekwere. Radical linguistic decolonisation must take us beyond fascination with all things English all the way back to our common kwerekwere roots. Radical cultural decolonisation must take us beyond notions of renaissance, clearly borrowed from the European renaissance project, which, among other things, bequeathed us colonialism.

Today, white South Africans of all classes are first in the queue to exploit the cheap labour of the amakwerekwere.

The central thesis of Nyamnjoh’s #RhodesMustFall is that white people are among the more recent amakwerekwere to cross over into the physical and psychological borders of South Africa.

To make this point sharply, he focuses on the wealth and empire-building strategies of one of the most famous and most powerful white amakwerekwere, Cecil John Rhodes.

As a literary and discursive device, the summary christening of Rhodes as the model kwerekwere of all amakwerekwere yields mixed results. But it is a tactic that enables the author to discuss notions of citizenship and noncitizenship, and insiders and outsiders, in a nuanced and insightful manner.

Here is the irony we must not lose. Rhodes the kwerekwere (like his contemporary, Paul Kruger) managed not only to lose his kwerekwere status, but also to impose and inscribe himself powerfully and so thoroughly on the bodies, hearts, minds and souls of the invaded and vanquished black citizens.

Incidentally, Rhodes believed in the hierarchy of races, with the British and the British empire on top of the world and black people, whom he also regarded as children, at the very bottom.

To get ourselves out of the self-hating conundrum of Afrophobia, several things need to happen. We need to let go of truncated and static notions of citizenship. This means being open to more dynamic and mobile notions of citizenship between and among Africans. Surely the African citizen is not only the bloke who never leaves his country, city or village? The South Africa we have today would not exist without immigration and emigration.

We must also get rid of presumptive notions about African foreign nationals, which include seeing them as having had no life before they came to South Africa, as being unqualified, as being here to stay and being burdens to be carried rather than assets.

So, have South African born-frees, through the #RhodesMustFall movement, finally connected the dots and realised that Rhodes was as much a kwerekwere as Ernesto Nhamuave, the Mozambican “burning man” in one of the most memorable images of the 2008 xenophobic attacks?

I am not so sure. Like generations before them, the born-frees need to embrace the ironies and contradictions in the past, present and future.

Rhodes is not only “out there” but also “in here”. For Rhodes to truly fall, he must fall truly and completely inside of all of us. Now, that is easier said than done. The kwerekwere is in the citizen and the citizen is in the kwerekwere.

If you want to spot a kwerekwere, start with the man or woman in your mirror. Whoever you may be, reach out to your inner kwerekwere and let us start building expanded and dynamic notions of citizenship together.

Tinyiko Maluleke is a professor at the University of Pretoria. The views expressed here are his own. Follow him on Twitter @ProfTinyiko