Drinking from the Cosmic Gourd 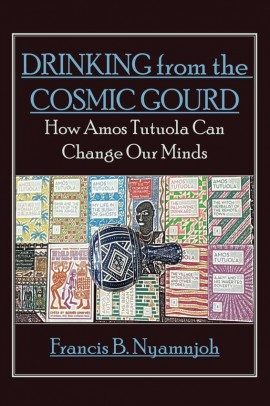 The illusion of completeness pervades almost every sector of our lives – in politics, religion, science, and even romance to name just a few. Such ideas, whether academic theories, methodological techniques or ideologies are often well-packaged in the most glitzy, flamboyant and reassuring labels, exported from the headquarters of modernity and their satellite locations –for global consumption by all and sundry. The concept of ready-made perhaps best captures these packaged ideas and theories – labels drawn from the language of my childhood with respect to sartorial preoccupations. For fathers who wanted to be taken seriously in the 1970s and 1980s, shopping for ready-made clothes for one’s children and wive(s) was something many aspired to – as it signalled one’s ability to consume and glorify one of the ultimate trappings of modernity – imported luxury clothes. The prestige accorded ready-made clothes contrasted remarkably with those commissioned by the masses who relied on the neighbourhood tailor or second-hand clothes discarded by consumers in the global north for recycling on the bodies of their less fortunate underlings in the global south.

Drinking from the Cosmic Gourd by Francis B. Nyamnjoh is a deeply infused treatise that aims to exorcise a hegemonic spell, occasioned by the ready-made epistemologies that have enthralled its consumers and reproducers in a dreamy state since the colonial age. Such exorcism as most are wont to be – is a ritualistic affair, replete with incantations, repetitions and invocations – all aimed at reclaiming the mind and soul of the possessed. The cleansing agent in this expeditious enterprise is a collection of magical stories recounted by Amos Tutuola’s narrators or quest-heroes of which The Palm-wine Drinkard lays a solid foundation. It is in this surreal tale, drawn from Tutuola’s arsenal of Yoruba folktales that we encounter the complete gentleman – who in reality, is a Skull from Dead’s Town and who, determined to win the affection of a lady that has caught his fancy in the world of the living, borrows an assortment of body parts as well as elegant clothing in order to look as dashing as possible. The complete gentleman is – so to speak, a ready-made export from Dead’s Town in his overconfident quest to win the affections of a stunning lady – but his completeness is a temporary illusion because he must give back – once his mission is accomplished – every body part upon his return to the underworld.

For far too long, ready-made epistemologies, fashioned and deployed from the West have dominated scholarship in and on Africa – championed as it were by gatekeepers in both the West and Africa. Like the fathers of my childhood, determined to show-off their accession to modernity through the purchase of ready-made clothes, African scholars are expected to master theories and theorists from the West in their quest for visibility, however marginal, most often without questioning their suitability or relevance to African contexts. Many an African are unperturbed by the fact that a huge proportion of these Western epistemologies and the theories they generate insist on the totality of their capacity to explain all, to be complete in their boundedness, in their obsession with binary and opposing explanations – see for example the following opposing contrasts: rationality vs irrationality, Christian vs pagan, tradition vs modernity, religion vs magic, etc.; epistemologies that are always ready to provide more and more nebulous answers and less encouraging of probing questions.

Whilst many African and Africanist scholars have pushed back and advocated the re-centring of Afrocentric theories, concepts and worldviews (cf. Amadiume, 1987; Asante, 2007; Mafeje, 1997; Mudimbe, 1988; Ngugi wa Thiong’o, 1986; Oyewumi, 2005), these ideas have hardly revolutionized the curricula on the continent. Why have the social sciences and humanities in Africa not embraced conceptual tools and epistemologies that are relevant to and accommodating of the experiences of ordinary Africans? Why are our scholars less excited to build bridges between the popular epistemologies of Africa with those derived from the West – now enshrined and venerated in their ivory towers? Even the casual observer would easily spot the gaping disconnect between knowledge produced and valorized in African universities with those that constitute the foundations of knowledge outside of these universities. In the wake of the #RhodesMustFall and #FeesMustFall movements that rocked South Africa in 2016 and beyond, Nyamnjoh invites students and scholars of Africa to take seriously the enterprise of what an endogenous African knowledge system would look like and how this could be fashioned to serve the needs of ethnographers, researchers and the broader public seeking to understand and explain African sociocultural realities. Drinking from the Cosmic Gourd is Nyamnjoh’s attempt to forge a paradigm inspired by Tutuola’s storytelling. As I see it, he seeks to accomplish two major objectives: first, to decentre, deconstruct or disentangle the social sciences and humanities from their provincial, parochial, patriarchal and Eurocentric origins and biases and from illusions of completeness; second, to inspire or lead a new generation of students yearning for a decolonized education as well as the current gatekeepers at African universities (if they’re ready and willing to change their minds) to embrace knowledge founded on popular African epistemologies. Such scholarship rests on two foundational concepts – convivial scholarship and incompleteness. “With convivial scholarship, there are no final answers, only permanent questions and ever exciting new angles of questioning” (p. 6).  Incompleteness on the other hand elaborates the perspective that knowledge production and social reality are “dependent on interconnections, relatedness, open-endedness and multiplicities” (p. 2) with profound implications for both social practice and theorizing.

Like the complete gentleman, aka the Skull, we’re drawn into Tutuola’s universe wherein incomplete beings and non-beings thrive in surreal and magical spaces as well as in the world of the living. Scholarship founded on a solid understanding of incompleteness, Nyamnjoh contends, defies compartmentalization or categorisations that are finite and in so doing, provides space for a more enriching and rewarding intercourse between knowledge systems and ways of being. He further contends that by embracing incompleteness, the end result is “humility”, and “a critical consciousness” that in turn generates energy (121) and deep recognition of one’s imperfections, transience, lack of autonomy and independence and that self-fulfilment is always a work in progress (p. 121). Drinking from Tutuola’s cosmic gourd indeed is a humbling process – one that challenges everything colonial education/religion etc. has disseminated and now fiercely defended in our universities. Nyamnjoh articulately introduces readers to Tutuola’s universes wherein he challenges the binaries and universalisms of colonial and Eurocentric epistemologies – pointing us to a world that has always been under our own very noses – a world that is dynamic, fluid and ambiguous – in sum, a world of incomplete people and things.

This notwithstanding, the question must be asked: are Tutuola’s ideas of self-activation, potency and efficacy relevant to ongoing epistemological debates on African knowledge systems and ways of being? Nyamnjoh answers in the affirmative and invites us into a conversation that demonstrates how ideas of incompleteness may further illuminate our understanding of Bourdieu’s concept of habitus, or the perennial debate in the social sciences between structure and agency. Tutuola’s narrators and quest-heroes help to school us about the limits of boundaries, fixities, obsessions with binaries and how much more accommodating we could be embracing in fluid worlds where structures are resilient only insofar as they are products of agency and improvisation by social actors. Thus, Nyamnjoh asserts, “Humans are as much products of culture and society … as they are producers of culture and society and consciousness. Humans are both victims … and progenitors (creators) of the social rules and regulations that inform their relationships with and perspectives (consciousness) of themselves, others and the worlds” (p. 163). A universe of incomplete beings has a lot to teach us; that we ourselves are never complete – that we inhabit a world of “self-consciously incomplete beings, constantly in need of activation, potency and enhancement through relationships with incomplete others and by means of embodied and external technologies” (p. 195). This is evident in the striking similarities Nyamnjoh recounts of Tutuola’s universes with those inhabited by Cameroonians and other Africans – worlds in which the sacred and profane, the domesticated and the wild comingle so easily. Explanations or accounts that draw on the absurd, of magical encounters with ghosts, the living-dead, zombies, of politicians and cabinet ministers seeking potency in mystical orders or tales of humans capable of transforming themselves into any and everything – are hardly or unique to African worldviews.  We’ve seen this with J.K. Rowling’s Harry Potter or J.R.R. Tolkien’s The Lord of the Ring series that have captivated readers and movie goers the world over. What I find vexing with colonial and Eurocentric epistemologies and the theories they generate is that they deny or feign ignorance of the fact that humans draw on what anthropologist, Stanley Tambiah has referred to as “multiple orderings of reality” (cf. Bowie, 2006)– that is, we all have a set of beliefs and theories that enable us to order or make sense of the world. These theories or explanatory schemes are variously categorised as magical, scientific, rational, irrational and so on – but what they all share in common is that they are all harnessed by humans to make sense of the world and their experiences in it. Living in a world overwhelmed by covid-19, a world where everyone irrespective of status has been subjected to lockdowns and that has confounded science – is a stark reminder of our incompleteness as humans. No doubt, we have seen a legion of explanations about the origins and epidemiology of the virus – ranging from 5G to biblical proclamations of God’s wrath. What Nyamnjoh’s work reminds us in the wake of these and other issues that plague humanity is that – even these popular epistemologies have a place in the boardroom of debates about how and what we know – seen and unseen. The concept of incompleteness can help to deepen our understanding of the limited and limiting conceptions of ethnic identities, gender, sexuality (e.g. homosexuality is unAfrican), of the relationship between politics and the occult, of alleged magical mechanisms of accumulation, of migration and blocked opportunities and many other domains where so-called rational explanations compete with their irrational alters.

In the age of decolonial education, we are invited to embrace convivial scholarship that like the proverbial heavenly mansion with many rooms – has a privileged space for a theory of incompleteness. What Tutuola teaches us is that we inhabit a universe akin to that of the complete gentleman – that is, one in which we owe our identities, knowledge and experiences to many others – dead and living and that endogenous African epistemologies matter. These must be translated into how research is conducted and taught, in the deconstruction of social science theories, in how we strive to build bridges between the humanities, the social sciences and physical sciences, Western medicine and African therapeutic systems, indigenous African worldviews and proselytizing religions etc. Drinking from the Cosmic Gourd is not only a welcomed addition to current debates on decolonising education but it should be essential reading to all open-minded scholars interested in building bridges across knowledge systems. Whether Amos Tutuola by way of Nyamnjoh’s interpretation successfully changes your mind or not, the fact remains that we’re in many ways, kindred with the complete gentleman who’s just a skull without his borrowed parts.

Mafeje, A. (1997). Who are the makers and objects of Anthropology? A Critical comment on Sally Falk Moore’s ‘Anthropology and Africa’. African Sociological Review, 1(1), 1-15.