Growing up with Tanzania 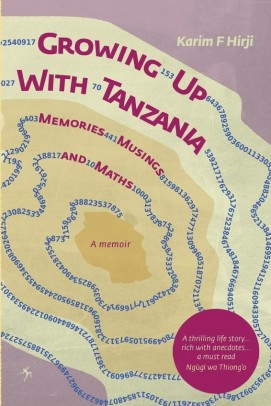 Karim Hirji grew up during the dramatic years before and after independence. He is an Ismaili whose parents came from the Indian subcontinent and this memoir provides a rare view of how Indians made the future Tanzania their home.

Hirji begins by depicting provincial life in Lindi during British colonial rule where many Asians of different communities were engaged in trade and commerce, and he reflects on the hierarchical relationship between the colonial rulers, the Indians and the Africans. The family moved to Dar es Salaam when he was in his teens in 1961. The Ismaili community were mainly living in Upan­ga where their Jama’at Khana (mosque) was located and he describes playing cricket and attending the Aga Khan Boys’ school. This is when Hirji fell in love with numbers, anticipating his later life as a professor of mathematics in the US. The memoir is sprinkled with mathematical concepts, presented in a thought­ful but fun way (readers who are not mathematically inclined can readily skip these pages: they are not essential to the story).

Hirji went to Dar Technical College for his secondary education and found him­self in an environment where the majority of students were Africans. This had a transforming effect on his outlook, and he began to see himself as ‘a member of an emergent nation unified and guided by a noble leader’. During this pe­riod he attended a ‘nation-building’ camp at Kinondoni for a month, where the majority of students were again African. At that time not many Asians were exposed to the wider world because they tended to remain segregated within their own communities. His discovery of mathematics led him to move next to a boarding school at Kibaha to complete his schooling. Ujamaa was in full swing and all school leavers had to do national service prior to going to university. Hirji attended Ruvu camp for six months and during this period he reflected further on social and racial equality.

This was a challenging time for Asians in the country, and they did not always perceive the transition from colonial rule as positive. Hirji manages to capture how many of his friends reacted to these changes. Asians had come from India to Africa under the umbrella of British colonial power, and cultural separation from the local population was embedded in their mindset. Africanisation in the 1970s led to the mass exodus of many Asians because they felt insecure. The nationalisation of property after the Arusha Declaration led the Aga Khan to negotiate with the Canadian government to allow the Ismaili community to leave Tanzania and resettle in Canada. Hirji captures the early euphoria be­fore nationalisation and reflects thoughtfully on its consequences. He notes that many of his family and friends (of Indian origin) are scattered all over the globe, including in the US, Canada and England. He himself spent 20 years in aca­demia in the US, but does not reveal how this came about.

This memoir is very much a personal journey seen from the eyes of an Asian growing up in Tanganyika/Tanzania during a period of great change. It pro­vides a rare glimpse of the Ismaili community and its cohesiveness. The Aga Khan has played a fundamental role in directing the life of its followers and there is no doubt that Hirji is very much a product of that community. There is much to recommend his account, particularly his musings on education and mathematics.
Shamshad Cockcroft

Shamshad Cockcroft grew up in Zanzibar and is a professor of Cell Physiology at University College London.