Garfield Todd: The End of the Liberal Dream in Rhodesia

The authorised biography by Susan Woodhouse 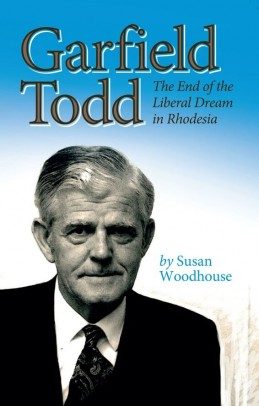 The story of Garfield Todd in Central Africa starts in 1934. At the age of 26 he and his 23- year old wife, Grace and their adopted daughter, Alycen, came from New Zealand to the British self-governing colony of Southern Rhodesia to run the New Zealand Churches of Christ mission station at Dadaya in the Lundi Native Reserve near Shabani (Zvishavane).

An article in the Commonwealth magazine The Round Table in 2011*pointed out the unusual way the Todds arrived in Africa.[1]

It said: “They had no orientation period at any of the established missions and came to Dadaya un-tutored in the ways of the white world, or how Europeans were expected to treat the ‘natives.’ The couple found their own way of doing things and the only baggage they carried in Africa was their Christianity and a fundamental belief in the kind of democracy and equality of their native New Zealand.”

This “lack of orientation” and their lack of knowledge about the ways of the white world in Rhodesia were the couple’s greatest strength as far as their missionary life was concerned and - arguably - the source of Garfield Todd’s greatest weakness soon after he entered politics in 1946.

Garfield Todd’s life as a missionary and preacher of un-rivalled excellence was written about by the late Michael. W. Casey in his book “The Rhetoric of Sir Garfield Todd – Christian Imagination and the Dream of African Democracy”The veteran journalist Ruth Weiss has also written about Todd in “Sir Garfield Todd and the Making of Zimbabwe” and so have the important Zimbabwean historians, Lawrence Vambe and Judith Todd. Professor Terence Ranger (“Revolt in Southern Rhodesia 1986-7”) and Hardwicke Holderness (“Lost Chance in Rhodesia”) have both made important contributions to our understanding of the short-lived attempt by Todd and his followers to install a Western liberal system in Rhodesia.

Now, three cheers for Susan Woodhouse who has written the longest and most authoritative and readable work to date about a man who has been, almost, air-brushed out of the Zimbabwean story.

The author of this important book first worked for Garfield Todd when he was Prime Minister of Southern Rhodesia (1953-1958) and then as a close family friend, who went to live with the Todds at their home at Hokonui Ranch in Matabeleland.

A life-long friend of Grace, Susan Woodhouse in 1992 was asked by the family to write the biography of by then Sir Garfield Todd, knighted for the various services he had rendered to the well-being of the Commonwealth.

Twenty six years later the job is done. The Woodhouse book will soon be available in bookshops throughout Central and Southern Africa, the UK and various countries in the English-speaking Commonwealth, with launches first in Harare and then in Edinburgh, Scotland where both Garfield and Grace had their ancestral roots.

As Superintendent of the Dadaya Mission from 1934-1953, MP from 1946 and then from 1953-1958 as Prime Minister of Southern Rhodesia during many of the key moments during the life of the Central African Federation (CAF) the Todd story is enthralling, although little known to most young Zimbabweans.

Sixty years ago in 1958, Garfield Todd was removed from office by his own all-white cabinet, fearful he was moving too fast by suggesting a widening of the African franchise.

Thereafter, Todd continued his increasingly desperate attempt to persuade his adopted country’s whites that their only hope lay in co-operating with African nationalists who - perhaps ironically - began effective action against the government during his premiership.

Yet, when he was overthrown, thousands of African wept and sang songs in his praise. An editorial in the African Daily News said that Garfield Todd was the one white politician that blacks admired and trusted and that his fall was “a severe blow to the forces of co-operation in this country.”

By any standard Sir Garfield Todd (1908-2002) was a great man. But was his legacy anything more than a deferred dream about the need for a multi-cultural, non-racial society in Southern Rhodesia?

This and other questions can only be answered by discerning readers with open minds.

Woodhouse provides the clues but the reader must join up the dots and reach his/her own conclusions.

I know how determined Susan Woodhouse was not to produce a piece of hagiography. Over the last 12 years I came to know her well, respect her greatly and witness – because of some research I did for her on nationalist politics in the 1960s and 1970s - the massive effort she made to check facts, name sources and say thanks to the numerous scholars who laid the foundations upon which her own book now stands.

My deepest wish is that this new book about Garfield Todd – his significant achievements as well as his lamentable failures - opens up discussion and debate in post-Mugabe Zimbabwe. The Scotland-based author draws our attention to both. She worked largely on her own, traveling tens of thousands of miles studying archives and interviewing many of the men and women who worked alongside Todd, first at Dadaya and later on during his days first in the Rhodesian wilderness and then towards the end of his life when Mugabe appointed him as a senator before falling out with the man who had done so much to promote and advance the cause of black nationalism in Africa.

“In my end is my beginning,” wrote T. S. Eliot in his Four Quartets. These are words that strongly apply to Garfield Todd as he approached the close of a long, controversial, sometimes turbulent but almost always fascinating life.

In one of the last letters he wrote to her, he said -”Dadaya stays at the centre of things.”

As I said earlier, for a whole range of reasons, the story of this remarkable man has been (almost) air-brushed out of Zimbabwe’s history. Most young Zimbabweans are unaware that there were many in Rhodesia ready to risk their careers – even their lives – to stop Ian Smith coming to power.

This book takes the reader from 1930’s Rhodesia, across a spectrum of political, economic, educational and social developments.

Earlier that year, a peeved Robert Mugabe took away Garfield Todd’s citizenship, his passport and his right to vote. Todd had earlier denounced many of Mugabe’s economic and political programmes. ”I am horrified by the destruction of our economy, the starving of our people, the undermining of our constitution, the torture and humiliation of our nation by Zanu (PF),” said Todd who promised to defy the man he had once so admired by a symbolic act that caught the world’s attention.

At the March election in 2002, he queued in line and made a symbolic gesture, touching the ballot box as a priest might touch the head of a child.

Susan Woodhouse has written an important book, one that will throw fresh light on a long neglected period of Zimbabwean history.

It's a book that deserves a place on the shelves of schools, colleges and universities and the homes of ordinary people who have an interest in the story of Africa.

She has brought to life the works and words of a great liberal and Christian leader in Africa. It is a well-told story that must resonate with Zimbabweans of all ages and backgrounds as they walk towards the next stage of their history – a much more hopeful future.

[1] The Dadaya Years: The challenge of understanding Garfield Todd by Susan Paul (Woodhouse) and Trevor Grundy- The Round Table, December 2011).

Trevor Grundy is a British journalist who lived and worked in Central, Eastern, Southern and Western Africa from 1966-1996.