Politics, Profits and People in the Making of Zimbabwe’s Blood Diamonds 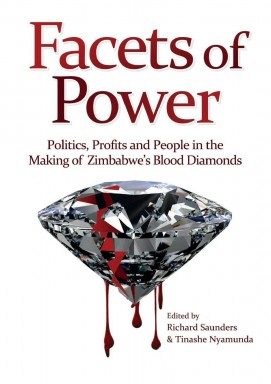 On Thursday 3 March 2016, Zimbabweans tuned-in to watch “The President @92”, an interview with Robert Mugabe, recorded to mark his birthday ten days earlier. Many watched in disbelief as he told the nation:

“We have not received much from the diamond industry at all… I don’t think we have exceeded US$2 billion, and yet we think that well or more US$15 billion has been earned in that area… The companies that have been mining have virtually, I want to say, robbed us of our wealth. That is why we have decided that this area should be a monopoly area and only the state should be able to do the mining… You cannot trust a private company.”

While providing the pretext to nationalise mining in the Marange diamond fields, this remarkable admission also provoked demands for an explanation. Why had Zimbabwe failed to realise its diamond dividend? Drawing on contributions from local academics and activists, Facets of Power provides important lessons in three domains:

When alluvial diamonds were struck in April 2006, a UK-listed company, African Consolidated Resources(ACR), held the rights to mine in Chiadzwa. Ostensibly to promote “indigenisation”, the Minerals Marketing Corporation of Zimbabwe (MMCZ) encouraged artisanal mining in Marange “at a time when government was aiming to marginalise ACR and its legal claim in the diamond fields”. Tinashe Nyamunda draws on interviews conducted during this “free-for-all” period, analysing interactions between magweja (artisanal miners) and state security personnel. Unregulated trading did not last, however. The MMCZ eventually “lobbied for the securing of Chiadzwa by state security agencies and later, commercial mining operations nominated by the state.”

Richard Saunders documents the “profoundly violent assault on informal mining” which followed. While the government of Zimbabwe sought to assert its adherence to the Kimberley Process Certification Scheme (KP) by formalising the diamond sector, he argues that “it became apparent that the aim was not to eliminate the black market trade, but rather facilitate and incorporate it within a mining regime dominated by elements of ZANU-PF’s security and political leadership.”

Mathew Ruguwa examines the social impact of diamond mining on schools in Marange. Parents who benefited from the diamond boom purchased bicycles for their children. Amid new-found independence and mobility, some youth indulged in artisanal mining and neglected their education. Teachers also pursued lucrative opportunities; occasionally partnering with their pupils in mining “syndicates”. Student attendance, educational standards, and examination results all declined. School classrooms became squats for miners and facilities fell into disrepair.

Alan Martin lays out the unintended consequences of attempts to impose transparency on Zimbabwe’s diamond sector at a time of heightened political competition and economic sanctions. He describes how the government resorted to dealing with illicit diamond smugglers, selling stones below market value and thus undermining the sums remitted to the exchequer. Zimbabwean elites were not alone in this pursuit; rather they were dependent on political and financial support from international allies.

Building on an earlier report, Martin surveys the clandestine business networks which serviced Zimbabwe’s diamond industry and stresses the “regional solidarity among nationalist politicians in the KP”. He alleges that Mozambique housed buying offices while South Africa became the “principal gateway for smuggled Marange goods”. DR Congo provided another conduit for stones to be “issued Kimberley Process certificates for onward travel to Dubai and, finally, the cutting and polishing factories of Surat, India.” Finally, secrecy jurisdictions such as Mauritius “played a role in hiding ownership structures and providing banking mechanisms through which mining companies can hide profits.”

These four analytical chapters are buttressed by first-hand accounts from Zimbabwean activists. Shamiso Mtisi, a member of the Zimbabwe Environmental Law Association, offers “an insider’s perspective” of five years of engagement with civil society and the KP. Farai Maguwu, founder of the Centre for Research and Development, recounts a harrowing tale of activism in the face of state intimidation. Melanie Chiponda and Richard Saunders describe the local participation spurred by the Chiadzwa Community Development Trust. Crescentia Madebwe and Victor Madebwe chronicle the fate of fifty families forcefully relocated by Mbada Diamonds between May to December 2011, highlighting short-term thinking and selective decision-making in the absence of government oversight.

Individually these civil society chapters provide a wealth of primary material for scholars; collectively, however, their narratives can be repetitious. A shortage of analytical rigour, disproportionate focus on grey literature, and eschewal of academic debates becomes evident upon comparison with the chapters dedicated to the political economy and international dimension. Providing space for rebuttals from the KP, mining companies and government agencies might have also helped to rectify this apparent imbalance.

Additionally, the volume would have benefited from more exact editing and greater consideration of chapter sequencing. A timeline summarising key events over the past decade would have eliminated the need for different authors to repeat the same chronology. But regardless of how the information is presented, this volume represents a landmark contribution to our understanding of the Marange diamonds and where the missing billions might be.

Nick Branson (@NHBranson) is Senior Researcher at Africa Research Institute and a PhD candidate at SOAS, University of London.