Cotton in Tanzania. Breaking the Jinx 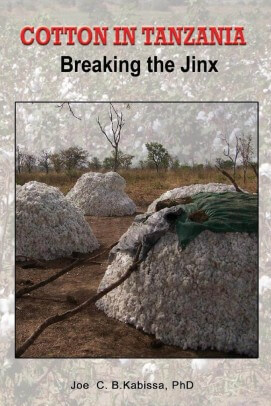 The right strategy for cotton in Tanzania has been a key issue for the agricultural sector both before and after independence. The question is complex and many observers and participants have contributed analyses which were specific to their time. Dr Joe Kabissa has now written a comprehensive account of the growth of the industry since German times up to the present day.

Kabissa is uniquely qualified for this task, being an entomologist who has served both as head of cotton research at Ukiriguru and Ilonga and as Director of the Tanzania Cotton Board, retiring in 2012, He has a very broad knowledge of the global cotton sector and is also that rare ex-civil servant who is prepared to criticise in public his former political masters.

The challenges facing the industry have always been both scientific (pests, viruses and yields) and institutional. Alongside these has been the critical issue of farm-level cropping options: what are the relative margins of cotton, maize, and rice in an ever-changing world and domestic market? These issues have not prevented nearly half a million small farmers growing cotton in a ‘good’ year, such as 2005/6 when a record total of 376,000 tons of seed cotton was achieved.

The potential value of the crop to the national economy was first recognised by the German colonial government which saw the eastern belt (Moshi to Iringa) as the principal home of the industry, with plantations linked to compulsory labour. The British government pushed the industry into the Lake Zone, focusing research at Ukiriguru, managed by the British (later Empire) Cotton Growing Association. In the 1950s, with high commodity prices, this policy was largely successful, with rising yields and an increasingly viable institutional structure in the Victoria Federation of Co-operative Unions (VFCU). This owned its own ginneries, exported most of the crop to the UK and was led by luminaries like Paul Bomani.

For the first decade after independence this format was preserved and production continued to rise. However, the big changes mandated by CCM in the structure of co-operatives in the 1970s proved immensely debilitating to the VFCU (now the Nyanza Co-operative Union, NCU). The donor-led ultra­liberal reforms of the late 80s and 90s reduced the NCU to a rump organisation and created destructive competition between about 30 ginners, eventually leading to a five per cent discount on the world price for Tanzanian cotton lint. A parallel history had taken place in textile manufacturing, with substantial investments in joint ventures by the National Development Corporation and seven foreign companies, nearly all of which were privatised in the 1990s with similarly disappointing results. However, at least two new private companies have emerged and perform impressively.

Kabissa deals with both the detail and the broader policy issues in an impressive way. He is very clear that high quality research in the 1950s and 60s facilitated the development of improved varieties with resistance to the critical pest and viral threats from bollworm and Fusarium wilt. This created a potentially powerful springboard for the sector. However, the national co-operative reforms of the 1970s were disastrous for the NCU and its members and underinvestment by government in research and development from the mid-1970s was grossly negligent. The lack of a policy on genetically modified cotton, embraced by Tanzania’s competitors, was an opportunity lost (for the time being). He shows how the cotton growing and textile manufacturing sectors have not been developed in recent years with any form of real interdependence in spite of a long-standing goal that 70 per cent of cotton should be spun and woven within Tanzania. In practice the low quality of lint supplied by the ginners and with its implications for yarn quality has locked the three or four weaving companies into production of kanga and kitenge cloth for a largely captive market.

Kabissa’s central point is that the huge potential of the cotton sector both from the point of view of farmers and the national economy has not been realised over more than a century of opportunity. With regard to the recent past he blames the lack of an effective strategy on government with its failure to build up the Tanzania Cotton Board as a regulator and driver of change. In particular he shows how repeated changes in the system for distributing inputs has created disillusionment among farmers who depend on an efficient system and for whom this a matter of economic survival. His conclusion, captured in the book’s subtitle, is that there seems to be a ‘jinx’ on real change, although he sees major possibilities in recent shifts to contract farming. Cotton in Tanzania is not only a courageous book, but sets an excellent precedent for seasoned professionals in Africa to take apart the failures of agricultural policy which continue to hold back output and rural security. This is a pioneering study, which deserves to be replicated in other sectors and countries.