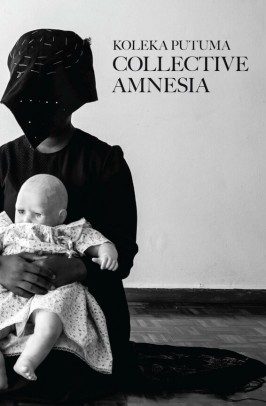 The front cover of Koleka Putuma’s debut poetry anthology, Collective Amnesia, reveals itself in layers. At first glance, it is a black-and-white image: a barefoot black woman, dressed in black and sitting on what seems to be a bare wooden floor; in striking contrast a white baby doll in a frilly white dress against the blackness of the woman’s chest.

In this image by Andy Mkosi, a Cape Town-based photographer, the two figures are a striking pair not only because of the way the monochrome photograph juxtaposes the differences in their skin, but also because of the history and the present the image evokes.

This is the turbulent pot into which Putuma has dipped her pen and because of this the poems in Collective Amnesia hum, writhe and rise out of the page to call for all of us to remember.

As the newest addition to the collection of anthologies from uHlanga Press (home of award-winning titles such as Thabo Jijana’s Failing Maths and My Other Crimes and Genna Gardini’s Matric Rage), Collective Amnesia is a stunning, complex exploration of the connections between personal and political memory. Separated into three chapters, Inherited Memory, Buried Memory and Postmemory, the book reads as a deeply personal diary and as a public reflection on the ever-shifting politics of identity, in a country that is still deeply troubled by the past’s complicated legacies.

In the book’s first chapter, Inherited Memory, Putuma examines intergenerational themes in poems that touch on black childhood and community.

In Hand-Me-Downs, one of the chapter’s most poignant poems, Putuma hands us lines that sparkle with an affection for black life. She writes: “I have inherited a lineage of hand-me-downs/ It has made me a mechanic and magician” and later she nostalgically reveals that she “[comes] from a lineage of borrowed and borrowing/ The neighbour’s sugar was an open jar without a debt collector”.

More than just a celebration of black communal life, poems in Inherited Memory subtly reconfigure the meaning of wealth, and thus push back against narratives that position black life as poor, damaged and ultimately disposable.

Moving deeper, the book’s second chapter, Buried Memory, is a deceptively quiet exploration of grief. With titles that hint at the spatial pervasiveness of grief — At the Church, At the Cemetery, Online, In Public, In the Kitchen — the poems unflinchingly attempt to unearth the effect of both personal and historical trauma. Here, Putuma captures and elevates a sense of collective rage that simmers just beneath the surface of a deeply traumatised society, such as in Indulgence, in which she asks: “Mother teach your daughter/ that a grief/ that sets itself loose/ in the middle of a busy highway/ is not madness.”

But it is in Collective Amnesia’s final chapter, Postmemory, where the reader senses the full weight of Putuma’s rage, as well as her passion. In this chapter, Koleka truly rolls up her sleeves and clutches at the dark and difficult questions that the past has left so many of us with.

Here, she unleashes her fire on themes such as violence and homophobia in Memoirs of a Slave & Queer Person, patriarchy in revolutionary movements with On Black Solidarity, gender-based violence in Oh Dear God, Please! Not Another Rape Poem and, most famously, on the state of post-apartheid race relations in her 2016 PEN South Africa Student Writing prize-winning poem, Water.

But what is grounding and powerful about Putuma’s rage is how closely she pairs it with tenderness. In Lifeline, a poem made almost entirely of the names of black women (a poem she revealed to be her favourite), Putuma stitches a spine of support that amplifies the voices and work of the people who hold her up, the people who chant “Black girl /Live!” and the people who are also committed to the work of joy and justice.

Collective Amnesia is a work of immense power, from a voice that is sure only to grow louder as Putuma steps deeper into the light she has already begun to cast.