Review by: Rosetta Codling, for readafricanbooks.com 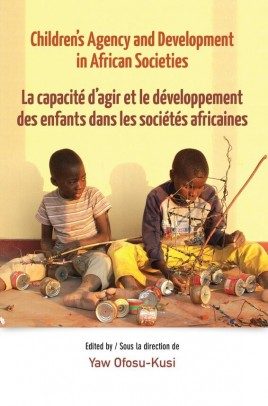 This work is the result of government endeavors to examine the state of child affairs. On a statistical level, this book provides documented studies of the relations between children, families, and the various African governments.

The book certainly meets the expectations of such a study and mandate. Each contributor to the study conveys similar, universal resolves regarding the young. Children are the world’s most precious, vulnerable commodity. Yet, rarely are children able to redeem the benefits of their status as precious commodities of African societies. The children are far too vulnerable to many negative factors.

The editor, Yaw Ofosu-Kusi, illustrates the fragile state of children in African societies within his study. He determines that….”children are experiencing a life of neglect, marginalization, and destitution in spite of the potentials of family and society to properly care for them (Ofosu-Kusi, p.1). “

Deevia Bhana, in her selection entitled “Childhood Sexualities in Africa: Agency and Vulnerability,” speaks of the vulnerability of children in terms of the pain, suffering, and disease that they suffer. Gender stereotypes harness the development of authentic roles of boys and girls. “Boys are inducted very early in life into the rituals of manhood through which they enact forms of masculine conduct that are not always peaceable…..“states Bhana (p.69). However, the argument is balanced by the observations that there are strong, racist influences from ‘without’ the continent does contribute negatively to these issues too.

A most unique scope of the dilemma facing Africa’s children is provided by Mokua Ombati. In this selection, we are privy to the manner in which children view their political leaders. “Children’s Perceptions of the Images of Kenya’s Principal Political Leaders” is the title of this study. Contrary to the notion that children are versed in the ‘happenings’ in their world. “They are not mere victims of the political process…..They have reasonability shown their political politically agency, competency, rationality and activity as citizens (p.118),” Ombati writes.

Each contributor and contribution in this work lends the reader a different means to understand the complex issues regarding the state of children in Africa. Professionals in the fields of psychiatry and sociology will find this work most resourceful in contrasting African agencies/services with those in the Western.

Critique: I was in awe of the findings of these studies. I yearned for this book to summon a dialogue for American professionals in the field of child welfare. I do hope so. This book echoes the similar problems and needs of children beyond the borders of Africa.

Children in the West suffer too. Children suffer vulnerability because they are dependent upon the limited resources afforded them. In short, adults appear to be the resource that limiting the state of children.

Rosetta Codling is a freelance literary critic. She has written reviews for the Ama Books, the Manhattan Book Review, the San Francisco Book Review, the Journal of African Literature, Autres Modernites, and Examiner.com. She retired (in 2006) as a secondary school teacher and Adjunct Professor of English for over 30 years in New York. However, she attends global conferences and continues to write professionally. In addition, she now is an Adjunct Associate Professor of English at Herzing University in Atlanta, Georgia.