Review by: Africology: The Journal of Pan African Studies 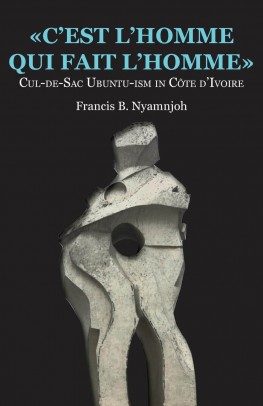 In recent years, there have been numerous discussions about Ubuntu in almost all spheres of life and across disciplines especially in African universities and other institutions of higher learning.

The ongoing debate is centered on whether Ubuntu could be employed as a universal theory to guide human conduct and relations while promoting good governance and peace. As such, Francis Nyamnjoh’s most recent book, “C’est I’homme qui Fait I’homme”: Cul-de-sac Ubuntu-ism in Cote D’Ivoire is timely. In fact, as the world continues to attempt to chime and forge burgeoning economies in the twenty-first century decapitated by fraught politics and poor governance, critical reflections on beseeching inexorable questions around human relations and the potential contribution of Ubuntu to instigate transformation, tame the vagaries of human emotions, and foster diaphanous relations and peace, are not only mandatory but more urgent in today’s world relations than ever.

In this book under review, Nyamnjoh critically engages the notion of Ubuntu to provide an up- to-date cross-continental view of Ubuntu as well as the efficacy and approaches to measure it. Most importantly Nyamnjoh shows how Ubuntu plays out not only in Africa but also at a global level. Drawing on his theoretical groundwork merged with rich experiences of inter- and intra- human relations in southern and western Africa, Nyamnjoh shows different ways in which the notion of Ubuntu is both an abstraction and part of the empirics of life. In doing so, he demonstrates how the notion of Ubuntu is appropriated and how it sometimes offers indelible lacunae for opportunism and serves as a façade for the unscrupulous exploitation of others. Nyamnjoh links principles of Ubuntu to conviviality to African migration to Europe to the West and other such places, where paradoxically Africans are treated as scam or pests including by nations that have formerly exploited them during slave trade and colonialism. On this note, Nyamnjoh calls for the need to observe the exigencies of reciprocating and sharing on ‘common grounds’ of justice what empire accumulated, often illegally and unscrupulously. The book is divided into seven chapters with the following headings: Chapter 1 “Introduction,” Chapter 2 “Treasure-Hunting Beyond the familiar Shores,” Chapter 3 “One Good Turn Deserves Another,” Chapter 4 “Shared Intricacies and Entanglements,” Chapter 5 “Ubuntu-ism and the Seesaw of Opportunity and Opportunism,” Chapter 6 “The Zombies are back at their Risk and Peril,” and Chapter 7 “Conclusion.” The “Introduction” sets the context of Ubuntuism and links the tenets to other scholarly works as well as to other spatial locations.

In particular, Nyamnjoh links Ubuntu to redistribution, broadly and deeply, of what one has accumulated. He makes the salient argument that to give abundantly in material terms as Ubuntu sometimes dictates might impoverish a person in material resources (or earthly wealth) but it enriches them abundantly in spiritual terms and in relationships they are able to activate, cultivate obsequiously and maintain through sharing. What does Ubuntu entail then? For Nyamnjoh, Ubuntu entails that a truly wealthy person is one with little or nothing to show for their sweat and toil, not because s/he is lazy, failed to make it in life, or has been a victim of unfair and a cruel devaluation of the local currency but because they have invested in people (p. 6). As this is the central argument that runs through Nyamnjoh’s book, the book is a study of inter- and intra-relationships in which inclusion, obligation, and reciprocity are emphasized (p.19).

In his Chapter 2, the author explores the potential wherewithal and contribution of mobility, immobility, and mobiles as enablers of reciprocity. He makes the argument that the mobility of Africans is more appropriately studied as emotional, relational and social phenomena as reflected in the complexities, contradictions and messiness of their everyday encounters as physically and socially mobile or immobilized beings (p. 28). Drawing on his analysis of mobility of Africans Nyamnjoh is apt to show us the thrills and tensions, possibilities and dangers, rewards and frustrations of social, cultural, political and physical boundary-making and boundary-crossing. The chapter highlights the cacophonous mantra and drama of being and belonging, and becoming that brings together different worlds, and explores the various dimensions of aspiration, servitude, mobility and marginality as well as being in transit or transition as an individual, a people, or a way of life (see for instance, p. 28). Nyamnjoh’s observations of the mantra and drama are critical. For him, Africans have learnt from their European counterparts to comb the world hunting for riches. They go to distant lands of the former hunters of yesteryears thereby challenging the predators of imperial and colonial times to desist from their zero-sum games of eternal dominance.

Nyamnjoh’s Chapter 3 tussles head on with the question of the unequal encounter between the African and the empire. He stresses the point that Africans who go to the West often expect the empire to return favours of Ubuntu that Africans granted the Europeans since colonial times (p. 35). Yet, for the author, contrary to the etiquette of Ubuntu the European media and politicians categorise Africans as illegal immigrants, tending to see them as tidal waves or floods of epidemic proportions that must be contained before swamping Europe (see for instance, p 35).

In the light of unfavorable characterizations of African migrants by Europeans, Nyamnjoh argues that European states behave as if the world and its resources, migration and mobility, were a European prerogative and monopoly. This, he contends because Europeans tend to gloss over or explain as normal the fact that Europeans have systematically left their countries in millions to either invade or inhabit other parts of the world with willy-nilly grin. Unfortunately or otherwise, Africans are resilient and persistent in their migration to the West regardless of the quandaries and tempestuous tribulations they suffer. For this reason, Nyamnjoh argues that just as no amount of potential slaves swallowed-up by the Atlantic Ocean was deterrent enough for the Europeans involved in the trans-Atlantic slave trade, no amount of swallowing up of boatloads of migrants by the Mediterranean Sea is deterrent enough for the Africans seeking restitution in the empire (p 36). But contrary to Ubuntu, the West is able to claim democracy, peace and prosperity by systemically outsourcing its poverty, violence and dictatorship to Africa and other purportedly underdeveloped regions of an interconnected world (p. 45).

Chapter 4 tackles the issue of agency. Agency is here explored in view of networks of interconnectedness and interdependent personalities which for Nyamnjoh is an aspiration and a constantly negotiated or domesticated reality for both individuals and collectivities. From this theorization, Nyamnjoh argues that subjects are not subjects in abstraction and they do not act alone as presumed in the theory of the liberal market. Instead, a person is a person because of another and through others. For Nyamnjoh, it is this aspect of suppleness and perpetual process of becoming that makes Ubuntu vulnerable to abuse to the extent of being used to exploit others via what he calls “zombiehood.”

In his Chapter 5, Nyamnjoh surfaces out ways in which those toiling in distant lands are victims of various claims by family, friends, acquaintances, and other intimate strangers who are not themselves ready to reciprocate. For this reason, Nyamnjoh asks how one might differentiate between opportunity and opportunism. He poses the question as to when a claim about a relationship should be taken seriously, and when it should be ignored (p. 79). On thinking through the discourse of Ubuntu and relentless questioning highlighted above Nyamnjoh argues that no humanity is complete if it entails wasting away the humanity of others, however justifiable that might be in the short term (p. 84). The argument he makes is in itself a challenge to the former colonists and all participants in the vile obduracy and nefarious project of trans- Atlantic slave trade, who in one way or another, deracinated and wasted away humanity of others through their culpable exploitative adventures. Nyamnjoh’s Chapter 6 brilliantly and creatively handles the frustrations that returning migrants meet when they realize they have been exploited by those at home. In this sense he argues that migrants abroad can be compared to zombies in a form of witchcraft called nyongo which privileges zombification of its victims. In such witchcraft, emphasis is not on blood dripping violence or death as on keeping victims alive and taxing them hard (p. 87). Thus, migrants are zombified and exploited home and away by families, kin, and by intimate strangers.

The “Conclusion” is that Ubuntu-ism is not fixed nor claimed or practiced homogeneously across Africa. It is more of a reality in the continuous process of becoming. For some, Nyamnjoh argues, it is an idea to be recuperated, resurrected or rediscovered through conscious acts of creative imagination and practice for its emancipatory potential to be mobilised as a critique of and complement to Western modernity (p. 127).

Nyamnjoh holds that the market has a sterile creed of greed and delusions of context free rights bearing, free floating individuals pregnant with choice, prospect and possibilities (p. 128). He argues for the need to reconcile market economies with gift economies of mutual obligations and reciprocity such as represented by Ubuntu (p. 138). Nyamnjoh ponders, thus, “…. in view of the vicissitudes, precarity, and precariousness of interested humans strung together by hierarchical relationships of opportunity and opportunism, to what extent should one willingly put one’s eggs in one basket, instead of distributing them strategically across institutions or one’s kin?” (p. 137). Francis Nyamnjoh’s book is a must read for students and scholars of de-colonial transformation seeking to rethink or un-think liberalism and the havoc it has wrecked in the Global South the historic repugnant episodes of trans-Atlantic slave trade and colonialism. It is also very useful for scholars and students of social, political, economic and anthropological theory who wish to interface the local and the global with the aim of finding lacunae beyond tinkering with liberal markets and liberal politics. While Nyamnjoh sounds Africanity in this book, he is also critical of notions like Ubuntu particularly in view of opportunism and the vulnerabilities associated with it. For this reason, the book offers vistas for de-colonial scholarship as much as it extends the hand of freedom to empire that needs to learn a lot from Ubuntu in order to shed off individualism, greed, and pestilence. Thus through his argument that welfarism is an aspect that Ubuntu offers, Nyamnjoh’s book has the potency and potential to survive the test of time in this recalcitrant, feral world where political-economic misapprehension, the chagrin of civil strife, and social injustice are inherently ubiquitous today as ever.