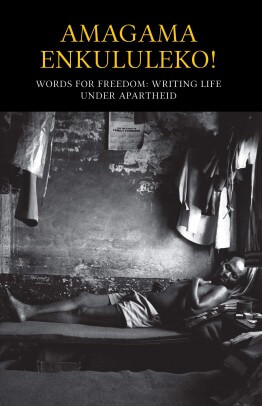 Contrary to what is sometimes said, in South Africa the past is not past; it is still a strong presence in people’s lives. It is not possible to understand the present without understanding the past. Forgiving does not mean forgetting.

History is often written from the perspective of the oppressor or the powerful. As the saying goes, “Tales of hunting often glorify the hunter.” When we write about South Africa, it is important to tell history from the perspective of the majority, those whose voices were suppressed until the end of apartheid. AMAGAMA ENKULULEKO sets forth a representative sample of the voices of the majority’s struggle for liberation.

This book includes short stories, essays, biographies, and poetry. The contributors give voice to the painful experiences of the majority from early colonialism to later apartheid.

In terms of contemporary stories, we have to be careful not to hear only the voices and perspectives of the powerful in the new order, men who have an outsized platform to tell us about their role in the liberation struggle to the exclusion of smaller organizations and the many ordinary, unaffiliated people who contributed to the struggle against apartheid, often with their lives. This collection includes the contributions of people from many parts of South African society.

The book is organized around six themes: Colonialism and Racial Capitalism, The Making of Apartheid, Black Spots and Forced Removals, Repression and Political Quiet, Black Consciousness and the Soweto Uprising, and Emergency and Revolt. Each section begins by grounding the reader with a useful general historical context and explaining the meaning and importance of the theme.

The writing is generally powerful and touching. It is also in places very painful, but this is not surprising, considering the context. Pain does not, however, dim the hope and inspiration that informed the liberation struggle.

Writing about the early colonization period in a poem titled ‘They’re Stealing Our Cattle On Misty Plains!’ Nontsizi Mgqwetho wrote,

They’re stealing our cattle on misty plains!The white man’s bounty lies in Africa.The cause of our tribulation.And so we die.

Despair of thee I never will,Struggle I must for freedom – God’s great gift. (43)

Writing in 1929 in a story about miners, RRR Dhlomo wrote,

‘Hau, didn’t you hear that Boss said to Stimela. “There are many Kaffirs in the compound”? Ho! Ho! You don’t know the white people!’

And they went out to dig Masaba’s grave (23.

About Pretoria, the administrative capital during the early years of apartheid, the brilliant journalist Nat Nakasa wrote:

There were many things that caught my attention immediately, like the benches in the City Hall gardens which are apparently set aside for whites only but which do not have the familiar ‘Whites only’ sign painted on them. Apparently Pretoria takes it for granted that no black man would ever dream of sitting on them.

But it was something else which struck me most forcibly. This was that the Afrikaner people of Pretoria seem to be more at home than anywhere else in the country. They seem to walk with a particular kind of dignity, confidence and sense of pride on the pavements of Pretoria.

The non-whites on the other hand are different. There is a shuffle in their walk and they carry about with them an air of uncertainty, even apprehensiveness, as though they are wondering what the next day has in store for them (69).

There are also glossaries embedded in each section explaining words and concepts that may be unfamiliar to today’s readers. At the end of each selection are questions for discussion or to facilitate further reflection, plus writing suggestions. The short biographical sketches of the major contributors are interesting.

AMAGAMA ENKULULEKO! is a teacher’s and learner’s delight. It is well-organized and presented in a way that is bound to facilitate learning. This book is highly recommended for general readers and especially for teachers and learners.