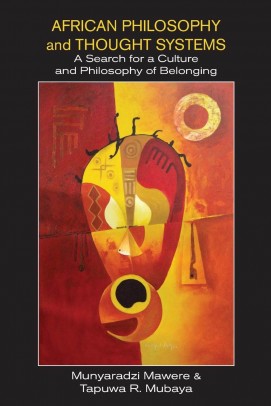 African philosophy is a relatively new discipline: its inception is dated by its historians to the publication of Placide Tempels’s book Bantu Philosophy in 1945, but the discipline really took off during the 1960s and 1970s when, after independence, African scholars started looking for viable philosophies to govern their nations and to build new identities for African states and their citizens.

Because of this wider context, the discipline has always been highly political and closely linked to African social and economic development as well as its cultural renaissance. As of now, the discipline has been represented by a number of introductions, anthologies, historical overviews, and encyclopaedias. Chapters on African philosophy can also be found in surveys and encyclopaedias of world philosophies.

The book African Philosophy and Thought Systems: A Search for a Culture and Philosophy of Belonging by Munyaradzi Mawere and Tapuwa R. Mubaya is driven by a strong paedagogical ethos. As Professor R. J. Zvobgo, Vice-Chancellor of Great Zimbabwe University, states in his preface to the book, philosophy is only taught in two universities, out of fifteen, in Zimbabwe and the present volume is expected to serve as a manual in the newly introduced course on African philosophy and thought at Great Zimbabwe University. Zvobgo praises the book as “the very first by philosophers in Zimbabwean institutions to attempt to synthesise African philosophy into a single thematic volume” (p. v).

If conceived as an introductory paedagogical text, the book fulfils its role very well. It touches on a wide range of philosophical ideas and trends and, to quote Zvobgo once again, it relates “the emergence, development and implications of ideals, ideas and values in African political systems of governance and logical reflective thought” to “indigenous African contexts” (p. vi). Indeed, the tight nexus between African philosophy and African politics is a salient feature of the publication. Despite the proclamation by the authors that philosophy is “neither cultural criticism nor political activism” (p. 24), African political philosophy and state ideologies take up six of the book’s ten chapters, and the authors do not shy away from contributing their own views to the debates.

The book first defines its subject: “what philosophy is and is not” (chapter 1). It goes on to consider the relation between philosophy and Africa (chapter 2). Chapter 3 introduces the now classical fourfold division of African philosophy by Henry Odera Oruka. Chapter 4 is called “Philosophical Genres and Movements in Africa”; “genres” are defined as “a unique style, art, expression, or work that distinguishes itself from many others such that it could be categorised as distinct” (p. 73, footnote 3). The term is used interchangeably with “philosophical traditions” (ibid.). This chapter studies several indigenous African traditions of philosophy: Bantu philosophy, Yoruba philosophy, MAA’T (sic) philosophy, and Ethiopian philosophy.

From chapter 5 on, the book tackles philosophical concepts and trends that have been influential in African politics. Chapter 5 deals with Ubuntu/Unhu/Vumunhu philosophy, chapter 6 examines Pan- Africanism as a possible framework for sustainable development in Africa. Chapters 7 and 8 deal with, respectively, Nyerere’s and Nkrumah’s philosophy, with the former being a representative of African Socialism and the latter a proponent of African Unity. The final two chapters look at the broader contexts of contemporary African philosophy: at cultural identity and globalization (chapter 9), and at democracy and human rights (chapter 10).

Critically, it can be observed that the criteria for some classifications in the book are not always clear and selections may sometimes seem random and arbitrary. For instance, the “genres” of African philosophy in chapter 4: why is the Yoruba tradition covered and not Akan? Why Ethiopian and not Somali? This randomness also attaches to the use of concepts, for example the concept of “genre”: how can “genres” be synonymous with “philosophical traditions”? Is “genre” in this sense in any way related to “genres” as understood in linguistics (“genres of speech”) or art theory (“literary genres”, “genres of films,” etc.)?

While the contextualization of philosophical ideas in actual world politics is highly commendable, sometimes a more rigorous distinction between historical concepts and the present-day situation would be helpful. For example, does the idea of Pan-Africanism as it was developed in the historical movement feed into documents such as Agenda 2063 (p. 134)? This lack of a distinction between history and contemporary politics may also account for the missing logic in the sequence of chapters: chapter 7 on Nyerere’s ideology and chapter 8 on Nkrumah are entirely historical, yet the preceding chapter 6, on Pan-Africanism, covers today’s political issues.

Despite these critical points, the book is a well-researched and comprehensive overview of the African philosophy debate. It is written in an accessible language and will make a good paedagogical text. But even beyond its use at universities, it provides interesting original perspectives and insights for scholars of African philosophy.