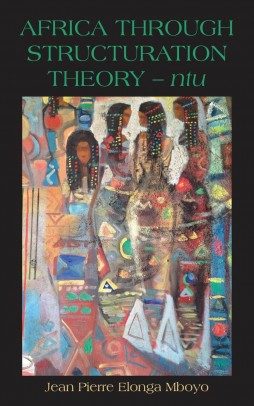 This work relies on the premise that Africa is stagnating socially, economically and politically. This chronic stagnation is due to the inadequacy of existing structures and the want of the ability of African leaders to successfully manage the continent.

Therefore, Elonga Mboyo proposes a theoretical and hybrid paradigm of analysis aiming at overcoming the evoked stagnation. This paradigm includes the sociological theory of the duality of structures as developed by Anthony Giddens, and the African ontology of Ntu. Giddens’s theory serves as a framework for the conceptualisation of African reality, while the Ntu ontology develops as the philosophical background for an appropriate interpretation of African development

The book is structured into five chapters. The first chapter stands on the idea that African intrinsic values associated with precolonial Africa got lost in the colonial era and were alienated in the postcolonial period. As a result, Africa developed on account of Western-centred frameworks, particularly with regard to fields such as education, economy and political leadership (Elonga Mboyo 2016: 4). For Elonga Mboyo, it is not necessary to excavate African lost traditional values in order to create an African-centred paradigm able to improve African systems of beliefs and ideals, including African-centred education and political leadership. According to him, the most important task consists of taking into consideration the interaction between both structure and agency in the shaping of African reality. Thus, he regards Giddens’s theory of the duality of structures as an illuminating perspective.

The British sociologist, Giddens, rejects the dichotomization of structure and agency underlying theories such as functionalism and structuralism. According to him, the former places the system of needs over and above the needs of individuals, while the latter insists on structural determinations. He calls to keep in mind that the urgent task of social theory today is not the elimination of the subject neither the consecration of structuralist thought, but on the contrary, the recovery of the subject without lapsing into the imperialism of the subject against structures, and vice versa. He thinks of social environnement in terms of the ““duality of structures”“, which refers to the interplay between both structure and agency in the shaping of social reality (Elonga Mboyo 2016: 15). In this respect, it can be noted that, for Elonga Mboyo, the contribution of Giddens’ theory to African stagnation consists of outlining of African structures as well as of ruling leaders in both ways: African bankrupcy and its potential recovery.

The second chapter deals with the relation between structure and agency, particularly on account of trust as a central value to each of them. This chapter argues that the claim for primacy of one over the other can be viewed as revolving around the issue of trust that each of them assumes and assures to the other. For Elonga Mboyo, structure can be defined as “hard material, patterning mechanism that has a life of its own and governs a series of other transient and individual happenings. It is the immutable stability that does not only transcend all but also within which everything fits“ (Elonga Mboyo 2016: 32).

This definition of structure is essentially operative, and subsequently it allows to take into consideration a variety of approaches. Giddens’ singularity consists of identifying some values that the concept has brought “including the recognition of a temporal dimension within structuration [which] represents the foundation of the theory of social reproduction which links to the recursive properties that the structures or ‘virtual systems’ have come to be“ (Elonga Mboyo 2016: 33). In addition, the analysis of the value of cultural objects, and the idea that nation states can be counted as cultural objects including their subsequent cultural value can also be considered as part of Giddens’ contributions.

The concept of agency relies on the premise that social interactions are not a pre-determined straightjacket for individuals to fit into. This concept implies individual commitment, a voluntarist subject that can lead to “unconditional respect for dignity and autonomy of all individuals by virtue of their common humanity“ (Elonga Mboyo

2016: 36). For Giddens, agency does not represent the global sum of single actions, but a continuous flow of conducts. This implies that individuals are trusted to configurate structures and not the opposite. Now, the question is how to reconcile this observation with African traditions which, according to various scholars including Mbiti and Tempels, champion structure over agency. For Elonga Mboyo, despite their attention to traditional rules, individual Africans “made deliberate individual choices that would have helped or failed the community. Likewise, the community would have set rules that helped or failed the individuals” (Elonga Mboyo 2016: 37).

Standing on the previous observation, it can be reminded that the issue at stake is the winning and losing of trust between both structure and agency. These concepts have respective analytical values and they refer to different ontological perspectives. Nevertheless, they cannot be viewed as dismissive of each other. They must be recognised as such and any attempt to ignore or abolish one of them is simply futile. Thus, trust can “be defined as the probability that he [structures or individuals] will perform an action that is beneficial (…) is higher enough for us to consider in engaging some form of cooperation with him” (Elonga Mboyo 2016: 38). Probability is the result of a process that applies to various domains including the educational system, health care structures, media, and government policies, to remind only a few. This process builds up slowly and it can dissipate quickly under the impact of various factors, such as political crisis, economic stagnation, etc.

Chapter three concentrates on ontological and methodological issues in order to restore trust in structure and agency –social interactions – accross political, educational, health and cultural fields in Africa. For Elonga Mboyo, ontology is the starting point of all research. It can be considered as a part of social reality. Taking a stand on Giddens’ theory, he rejects a sharp dualism between objectivism and subjectvism, structuralism and constructivism, and he subsequently asserts the duality of structures (Elonga Mboyo 2016: 57–58). On account of this assertion, he claims the existence of an African ontology that he describes as both a “minefield” and a “way of acknowledging Africa and the traditions of African thought” (Elonga Mboyo 2016: 59–60).

African ontology can be viewed as expanding beyond geographic limits of the African continent and including people who are not black. For being obscured for several reasons including, for example, colonisation and racial segregation, this thought developed in terms of a search for identity and the struggle against domination and (white) supremacy (Elonga Mboyo 2016: 60–61). This social reality characterises the structuration theory -ntu which does not insist on the excavation of the African past, but rests on the idea that “Africa and Africans are not robotically static but rather dynamic agents capable of making conventions around values that they press into perpetuity” (Elonga Mboyo 2016: 61–62). The use of expressions such as “force,” “force-beings,” “Ubuntu,”  and related concepts with the ntu  root, constitutes, for Elonga Mboyo, another way of conceptualising the evoked struggle (Elonga Mboyo 2016: 62–63).

The methodology focuses on scientific inquiry, as it explores potentialities and limitations of particular techniques or procedures. The question is “how do we go about enquiring about knowledge” and the restoration of trust in a post-conflict and post-dictatorship Africa. Despite the variety of contexts and trajectories of African people, Elonga Mboyo thinks that the structure remains both the medium and the outcome of this change’s process. Once more, he outlines the need for cooperation between structure and agency. “The African experience of agency still has some way to go before we can hope for not only the realisation of an authentic African ontology through the struggle for cooperation between structure and agency but also the production of knowledge in various fields” (Elonga Mboyo 2016: 70).

Chapter four analyses the process of “double de-contextualisation.” Elonga Mboyo makes use of the concept of “de-contextualisation” in two different ways: first, he refers to the situation in which a practice or practioner are taken out of their physical environment. Secondly, this idea is also used to refer to the fact that “a theory is taken out of its original context, not simply by someone wanting to grasp it and in the process coming up with incorrect interpretations or distortions (…) but mainly by a researcher, who uses a given theory on a separate set of people or practitioners who do not constitute the original constituency from which the theory (…) was derived in the first place” (Elonga Mboyo 2016: 79).

In addition to the context of this work, Elonga Mboyo observes that the “double de-contextualisation” process can be used as a strategy, by African people, to subvert colonial and postcolonial forms of domination (Elonga Mboyo 2016: 82). It also contributes to tackle Eurocentric mimicry as well as to promote African-centred paradigms of knowledge, development and emancipation.

Chapter five represents a case study of the duality of structures in Africa. It concentrates on the experience of the system of higher education in the Democratic Republic of Congo (DRC). This chapter rests on the premise that higher education is “an essential component for nations to be competitive in the knowledge society and meet environmental challenges” (Elonga Mboyo 2016: 101). The DRC’s higher education is divided into three categories: universities, higher technical institutes, and higher pedagogical institutes. On account of the process of liberalisation, almost a half of the existing educational institutions have been privatised. The quality of education suffers from a deep erosion with regard to agreed international educational standards. This erosion is due to factors such as the want of competitive structures (efficient policies and material support) as well as the lack of professionalism on behalf of Congolese teachers.

Once more, structures and agency are both involved. It is worth observing here that Elonga Mboyo does not go further to specify how important the responsibility is of each of them. He gives the impression to admit that both “structure and agency” are right and mistaken at times. In doing so, he unfortunately occults social power relationship and its subsequent domination and exploitation.

The work of Elonga Mboyo is a real example of interdisciplinary thinking. It confronts, on the same topic, achievements of modern sociology, ontology, and the science of education. It can be outlined that Elonga Mboyo clearly expresses his preference for sociology, particularly his passion for the theory of the duality of structures as developed by Giddens. Otherwise, by doing so, Elonga Mboyo fails to explore and to highlight the very African contribution in the struggle against domination and supremacy. The use he makes of the Ntu notion – which is fundamental to “African” ontology – seems somehow limited as it passes over burning and fruitful debates generated by Tempels’ publication on Bantou’s philosophy. The same observation is still valid with regard to the concept of Ubuntu for which he also seems parsimonious concerning its social and political implications.

Summing up, I note that Elonga Mboyo’s work is interesting as a theoretical essay on current African challenges, particularly with regard to social development, education, and the management of African states. It goes beyond nativism philosophies as well as claims for both interdisciplinary and intercultural approaches to the African struggle for emancipation. Therefore it is worth reading and thinking over.