What the Secret Agent Saw

Review by: Xan Smiley in the Literary Review 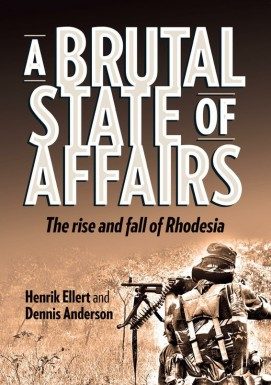 The authors of this book paint a detailed and dispassionate yet wrenching picture of the painful and bloody transformation of Rhodesia into Zimbabwe in the period following the white leader Ian Smith’s unilateral declaration of independence from Britain in 1965. Their main gift to historians is the wealth of information they provide, much of it hitherto unknown outside secret service circles, about how Rhodesia’s Special Branch, of which the authors themselves were two of the wiliest spooks, helped to keep the forces of African liberation at bay for so long.

As a correspondent in the country on and off during the decade before Robert Mugabe led the way to independence in 1980, I first met Dennis Anderson, one of the two authors, in the isolated little outpost of Chipinga (now Chipinge) in the remote southeastern highlands of Zimbabwe. It was the mid-1970s, when Mugabe’s guerrillas were infiltrating the area thick and fast, picking off white settlers, many of them diehard Afrikaners, one by one.

It was an accidental but fortuitous meeting. I was snooping around for The Observer. The local police didn’t like the look of me: their main aim was to get rid of me before I could sniff out the dire state of security in their beleaguered district. Shortly before the meeting, I had been consorting with missionaries in a darkly forested outstation called Mount Selinda. Many students at the mission school had absconded across the border to join Mugabe’s fighters in their bases in Mozambique. Missionaries were always the best source of information, as they were invariably cosily connected to the guerrillas, to the intense annoyance of the settlers and the police.

I had previously visited a number of nervy white farmers in the area, one of whom informed me, as we quaffed a beer on his veranda, that on each of the past four days a land mine had blown up a vehicle on the dirt road along which I was about to travel back to the isolated house of another white farmer and his wife. This man, an eccentric baronet who grew tea and had kindly lent me his battered VW Kombi, had given me strict instructions to be back within his compound, which was surrounded by a high fence topped with barbed wire and was monitored by black security guards, before nightfall. He would keep the gate open until I was safely back. Guerrillas were lurking all around.

Much to his irritation, I returned four hours after dark, a result of being waylaid in Chipinga by Anderson, then head of the local Special Branch, who had plied me with whisky in the only semi-civilised bar in this one-horse town. We had had the usual game of policeman’s cat and journalist’s mouse – or was it the other way round? He tried to assess how much I knew. I pretended to know more than I did, so that he would unconsciously confirm some of my guesswork. The upshot was a fascinating insight into guerrilla warfare and the measures that the Smith government and the Special Branch were taking to counter it. Anderson plainly had no love of the system he was defending but was doing his best, on this most permeable of front lines, to preserve it from chaos. I knew from the missionaries that one of his police colleagues, also drinking with me at the bar, had a reputation as a sadistic interrogator.

Remembering that meeting, I was not surprised that this memoir-cum-history is full of intriguing detail and written with no-nonsense clarity. The authors do not hold back from admitting that, all along, the Rhodesian venture was doomed to failure, or that the means to fend off the guerrillas were often brutal in the extreme – as were the methods used by the guerrillas to impose their will on the hapless villagers caught between both sides but on the whole broadly sympathetic to the cause of Zimbabwean independence.

One of the most terrifying features of this period, for the black villagers, was the habit of the Selous Scouts, a white-led commando force, of entering villages pretending to be guerrillas. This was in emulation of the ‘pseudo-gangs’ in Kenya in the 1950s that had sometimes duped villagers into giving away the haunts of the Mau Mau rebels. Ellert and Anderson reckon the Zimbabwean villagers often got wise to this gambit, though the Scouts did pull off some striking coups. But the authors conclude that the Scouts were too often undisciplined, excessively brutal and ineffective, as well as being over-romanticised by white Rhodesians as heroes of the bush: ‘They failed to have any meaningful impact to the outcome of the guerrilla war.’

The book shows how the white supremacist regime depended, more than is generally recognised, on the cooperation of black soldiers and black policemen, who formed a key part of the system of control and suppression. This helped the authorities to infiltrate the guerrilla network to a greater degree than I had realised. For instance, a leading nationalist politician, Jason Moyo, was apparently on the Rhodesian government’s payroll. When he later turned against his white masters he was assassinated.

The Rhodesians carried out or orchestrated a number of assassinations. I had accepted as true a report by the government of Zambia (which served as one of two main bases for the guerrillas) that Herbert Chitepo, a leading nationalist, had been murdered by one of Mugabe’s henchmen in an internecine feud, but the book asserts that it was a Rhodesian job. Perhaps I should not have been surprised by the degree to which the Rhodesians had infiltrated guerrilla ranks with informers. Guerrillas who were captured and then ‘turned around’ by the Selous Scouts were paid ‘kill bonuses’ for betraying genuine guerrillas.

The authors do not shrink from spelling out the scale of the killings when the Rhodesians made long-distance raids on guerrilla camps in Mozambique and Zambia. On each such raid, more than a thousand guerrillas were killed (a tally that must include many civilian camp followers), with barely any Rhodesian losses. On one occasion, a Mozambican ally who had helped the Rhodesians pinpoint their target was ‘wasted’ (in other words, murdered) as the attackers left, to make it look as if the raid had been carried out by home-grown Mozambican rebels. At other times, the Rhodesians poisoned the guerrillas’ food supplies and water tanks, and managed to infect their provision of clothes with poisonous toxins. They also dropped napalm (known in Rhodesian parlance as ‘frantam’) on suspected guerrilla hideouts.

Another striking revelation is the extent to which the Rhodesian security services successfully wove a web of connections across black Africa and further afield to circumvent the economic sanctions through which Britain and the United Nations sought to suffocate Smith’s rebel regime. Trade missions and unofficial diplomatic links were sustained with a range of black African countries, of which perhaps the most useful was Gabon, whose long-serving leader, President Omar Bongo, was actually on the Rhodesian payroll, even while chairing the Organisation of African Unity. Other discreetly friendly African countries included the Comoro Islands, Equatorial Guinea, the Ivory Coast, Madagascar, Malawi, Morocco, the Seychelles and Zaire. Beyond Africa, the sultanate of Oman and its British éminence grise Brigadier Tim Landon were hyperactive in helping to supply oil, helicopters and other valuable items. Iran under Mohammad Reza Shah was also helpful. The Omanis, like the Gabonese, allowed Rhodesia to register a cargo airline flying its colours as a flag of convenience.

Most notable of all was the support of the French intelligence services under Jacques Foccart, the legendary head of France’s security service in Africa, who seemed to operate almost independently of whoever was in power in Paris and helped provide the Rhodesians with an array of contacts across black Africa. In Europe, the Rhodesians could depend on friendly politicians and businessmen in right-wing circles, including the Bavarian leader Franz Josef Strauss. But Rhodesia’s most important allies were Portugal, until it was forced to grant independence to Mozambique in 1975, and apartheid South Africa.

If anyone among Rhodesia’s security officers emerges with honour from this episode it is Ken Flower, who ran the main intelligence service throughout this period yet constantly warned Smith of the futility of his rebellion against British rule. He told Smith the unvarnished truth – about, for instance, the scale and success of guerrilla incursions and the support they had achieved among rural blacks – which the ostrich-like white establishment refused to believe.

The book’s most astonishing revelation is how close recalcitrant units of the Rhodesian security services were to assassinating Mugabe in the run-up to, and immediately after, his election victory in 1980. It was partly thanks to the good sense and shrewdness of Flower that various plots against Mugabe were thwarted – which is why, following the end of white rule, Mugabe insisted on keeping Flower as his head of intelligence. It was not Flower’s fault that the Central Intelligence Organisation, originally an offshoot of the Special Branch, became the heart and soul of Mugabe’s regime as it evolved into one of Africa’s nastiest tyrannies. If there had been a peaceful, gradual handover to more moderate black nationalists before Rhodesia slipped into a guerrilla war that cost around thirty thousand lives, Zimbabwe might have escaped the venal clutches of Mugabe.